Page 79 of 87
by Auntie Slag
And if Overlord was found and fixed, assuming he wasn't turned to utter mush in the slow cell before it got blown apart, perhaps Rewind has been too.

Which means Chromedome's going to have a hell of a time taking two Rewind's on Channel 4's 'A Place in the Sun'.
by Patapsco
What would be amusing is if both Rewind's decide they're better off with each other and not Chromedome. But would Roberts do that? Probably not
by Auntie Slag
The repartee/fight between Tarn and Overlord was lovely. Wish it was longer, and Tarn is excellent at putting Overlord in his place (loved that last page).

Have to agree with others here that this is a riotously fun episode that will get better with time. Like Tailgate said a few years ago: "Its a... its a bit full on, isn't it"?

And Megatron was pretty stellar too. I thought he was at his most interesting around the early 30's issues, probably because it was so heavy with backstory. Sticking to his guns even though it means death by Tarn.

Deathsaurus and that group feel rather wasted. Everything that's happened so far could have been entirely by the DJD, so I guess they must do something significant in the next couple of issues (are there only two more issues to this arc?).
by Patapsco
I believe it's a six parter, so this is the halfway part where we have moved on incrementally since the end of 50. Drift and Ratchet have turned up, as has Overlord. Kaon's dead. Bit of EPIC BANTZ, bit of punching, that's about it
by Auntie Slag
Well I hope they can all sit down and talk it through. Be adult about it rather than resort to names.
by Patapsco

Auntie Slag wrote:Well I hope they can all sit down and talk it through. Be adult about it rather than resort to names.

hahaha, no chance. Anyway, I went back and read 50, 51 & 52 in one sitting and the whole piece reads a lot better that way. But it's still... not good
by Auntie Slag
I need to do that. It took me a good few goes of re-reading Remain in Light as a whole arc, thinking about it, staring wistfully at the evening sun, writing a bloated pustulating career destroying second album and then going back and giving it one more go to really feel the story.

And it was a little bit the same with Elegant Chaos, whereas Shadowplay was the bees knees from the off.

And its not the right thread to mention it, but Sins of the Wreckers issue 4. Blimey that was stonkingly good!
by Patapsco
Sins is interesting in that the first three issues I felt would read much better as a trade, but issue 4 was the first that worked as a stand alone issue
by Auntie Slag
Yes, totally agree. I think the fourth pulls up the quality of the previous three, and there's nothing really wrong with them, I can't put a solid finger on why I wasn't raving about it. But now it feels like issue 4 and 5 could elevate SotW so high.
by Patapsco
My main feelings on early Sins and why I wasn't feeling it was that it felt like something was happening off panel which was never addressed but was incredibly vital to the plot
by Auntie Slag
I guess so. There was this obliqueness about it. I love Sins' gloomy atmosphere, it reminds me so much of the second X-Files film (and I enjoyed that film, its look and feel, but probably only because of the warmth between Mulder and Scully), or Fargo.

I am enjoying the Dying of the Light, too. I think it could benefit from taking a page out of Sins' book and going for a slightly gloomier palette. Its so damn bright sometimes. Current colourist Joanna is great, but I miss Josh Burcham's more pastelly style. He really helped de-mystify a busy panel, and in this issue particularly there's some really busy panels!

Transformers: More than Meets the Eye #53

by zigzagger
Transformers: More than Meets the Eye #53 three-page preview by way of iTunes.

Full issue due May 25.
by Patapsco
Are we finally going to get any answers that don't involve Megatron after two issues of wheel spinning? Probably not. I do like that Swerve is the only one who realises how terrible their actual situation is. And of course, MarySueTron comes up with the idea for the last messages because MarySueTron must be at all places and all times and must be talked about if not present. Yeesh
by Auntie Slag
Just a quick, wacky thought about who Tarn really is. And its probably Roller and that's fine. But I was mooching around Wikipedia just now and check out this shot of Wheelarch: If you imagine that in Springarm's colours, don't all the helmet details match up with all the bits on Tarn? Megatron mentions how "You could be turned", and that's a pointer to loyal good buddy Roller, but doesn't it equally apply to loyal Lieutenant Springarm? And maybe there's further (very tenuous) evidence in that Rewind complained during Elegant Chaos that if they'd jumped there minutes earlier they could have saved Springarm and Wheelarch? And he has those pointy stick laser thingies behind his head, just like Springarm and Wheelarch, who were kind of like proto-Datsun brothers with their chunkier shoulder-mounted rocket launchers!

So maybe Tarn's head is a dead ringer for Springarm's head, whilst the rest of the body is all new with upgrades over time. Because Pax rode Springarm's body to victory/escape.

While Tesarus seems to share a similar colour scheme to Wheelarch: Or, perhaps wackier still, could Tarn be Proteus?
by Patapsco
I think a more emotional gut punch would still be Dominus but it's not going to be that because I don't think Megatron crossed paths with him or Rewind. Still Rewind is "allergic" to UV light and mnemosurgery scars only show up under UV light so someone "might" have gone in and maybe "smudged" a memory here or there. Hell, Chromedome might have "smudged" his own to cover it up
by Auntie Slag
Ooh, the UV light thing! Yeah, that's still got to play out. And Red needs to find out about that, too! 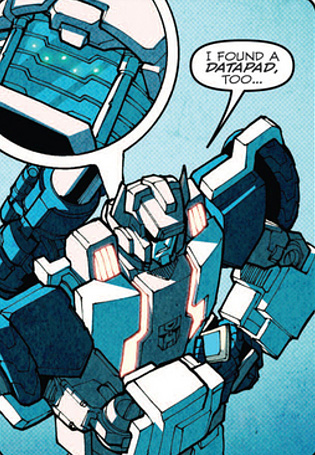 I wonder if Chromedome HAS ever gotten to Megatron?
by Patapsco
Why would someone smudge Red Alert's memories? I presume it was because he found out Overlord was on board way before he found out again
by Auntie Slag
Well that image of Red is from Shadowplay, about 4 million odd years before Overlord was put on The Lost Light, so he'd been tampered with for another reason. And he was working security for the fancy apartment building at the time. So either Overlord had a pad up there or someone saw a cockroach up on twelfth.
by Unicron

Patapsco wrote:Why would someone smudge Red Alert's memories? I presume it was because he found out Overlord was on board way before he found out again

The Red Alert bit is from the flashback in Shadowplay. It's to hint he was tampered with so as to point Prowl and Domey to the fact that the Senator was a closet-Con
by Patapsco
Like I would go back and fact check before posting...
All times are UTC
Page 79 of 87
Powered by phpBB® Forum Software © phpBB Limited
https://www.phpbb.com/