by Skyquake87
Odd that they're doing this when '86 Movie characters have already popped up in Generations recently. Wonder if these will be new toolings or just repaints of figures we've had before?

by CharlizeBaker
I also am curious about that....

by Warcry
Exhaust and Greasepit are coming as Selects releases.

I'm far too amused by how the character's official name on the instructions is "Decepticon Exhaust" but he's got a big-ass Quintesson badge or whatever that is front and centre on his chest...


Also, we seem to be getting a Marvel Legends-style line of non-transforming six-inch figures.

https://news.tfw2005.com/2020/06/24/mor ... way-413396
Not even vaguely interested in yet more Sunbow pandering, but it makes sense that's what they lead with. My first thought after seeing this is how the line would be the perfect outlet for Pretender shells, but I really don't see this lasting long enough to get into that. Because, honestly, who's the target market for this stuff? People who don't like transforming Transformers? Casual fans who don't want to pay for MPs? I can absolutely see the Optimus, Megatron, Soundwave, Starscream and Bumblebee selling like hotcakes, but beyond that? Are people going to buy a non-transforming Powerglide or Gears?

But if it lasts long enough to get me a badass Wildman/Baskerville-style Bludgeon I'll consider the line a success!

Warcry wrote: ↑
Thu Jun 25, 2020 7:00 pm
Exhaust is nice but I was more hoping we'd get Slicer this time around. Still, a good option for the mold if, like me, you have enough good Wheeljacks

Pretty nice. I can see that working as part of a merc team.

That's definitely not what I think of when you say Centurion, but it's a nice reuse of Brunt. The accessory pack is nice, but mostly just reminds me how ridiculously stingy they are with accessories for the actual figures.

Tigertrack kinda does the same, since he comes with the rifle AND the rocket launcher like both Sideswipe and Red Alert should have in the first place. I guess Hasbro figured they could deign to do the figure properly since they're not trying to sell us overpriced Targetmasters this year? He'll feel a lot more complete than the retail figures, that's for sure! The colours look really nice, and it seems like it'll be popular with pre-TF or eHobby fans. Not really my thing, though if I'd known this way coming I may have grabbed it instead of Sideswipe.

Rotorstorm is pretty disappointing. Not being satisfied with the two cockpits the mold already has, Hasbro pained a third on his chest! That mostly serves to remind me how Rotorstorm and Spinister look absolutely nothing alike. Not even bothering to change the head is pretty disappointing too, considering both Exhaust and Greasepit just above got the new tooling they needed to make them stand out.

by Denyer
It's like they don't get any feedback first, isn't it? Most people will have thought a) green Centurion droid, and b) Spinister's head is too distinctive so for a repaint that'll sell include one in the original mould.

by Skyquake87
...Yellow and Silver was my first thought for Centurion. Then I remembered everyone's only interested in the cartoon. Not really interested myself. Brunt is probably my least favourite of the Weaponizers, and the box of things that should have come with other figures isn't enough of a draw for me.

I'd be more excited for Tigertrack if I didn't already have the Masterpiece to scratch that itch and I'm a bit disappointed by Rotorstorm. It's just Spinister dressed up in Autobot colours. Although I appreciate the early '90s Transformers are probably going to have extremely limited appeal (although I could go for the Decepticon Stormtroopers using the Sideswipe mould - that would be neat, so long as they at least got new heads and weapons).

by Denyer
Not sure you could get a passable Centurion out of existing TFs unless it was a pretender shell, regular action figures might be a better base.

Rotorstorm's been in comics recently enough for some crossover sales. This is just half-arsed planning when they've gone to the trouble of weapon paint apps. Alternate heads clearly aren't out of the question as Exhaust got made from Wheeljack.

[Personally I got a KO 3P Vortex in blue and attached some junker Rotorstorm parts (head and cockpit) to it for a very rough voyager-size display piece mostly concealed behind other Wreckers.]

by Denyer
Anything reckon Sunstreaker's going to be the basis for the other battlecharger? 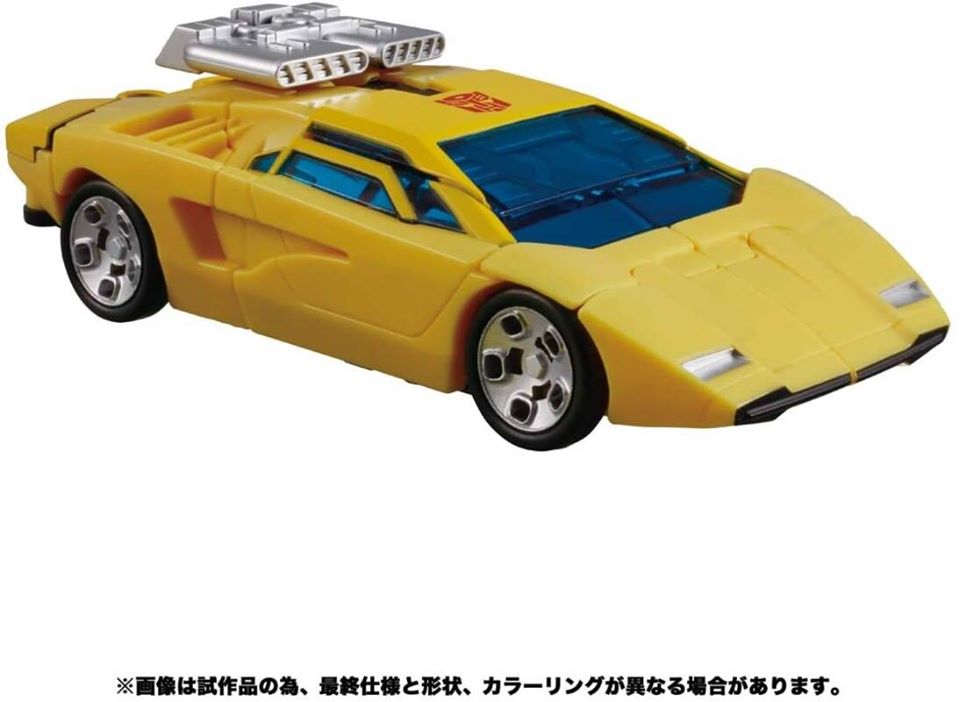 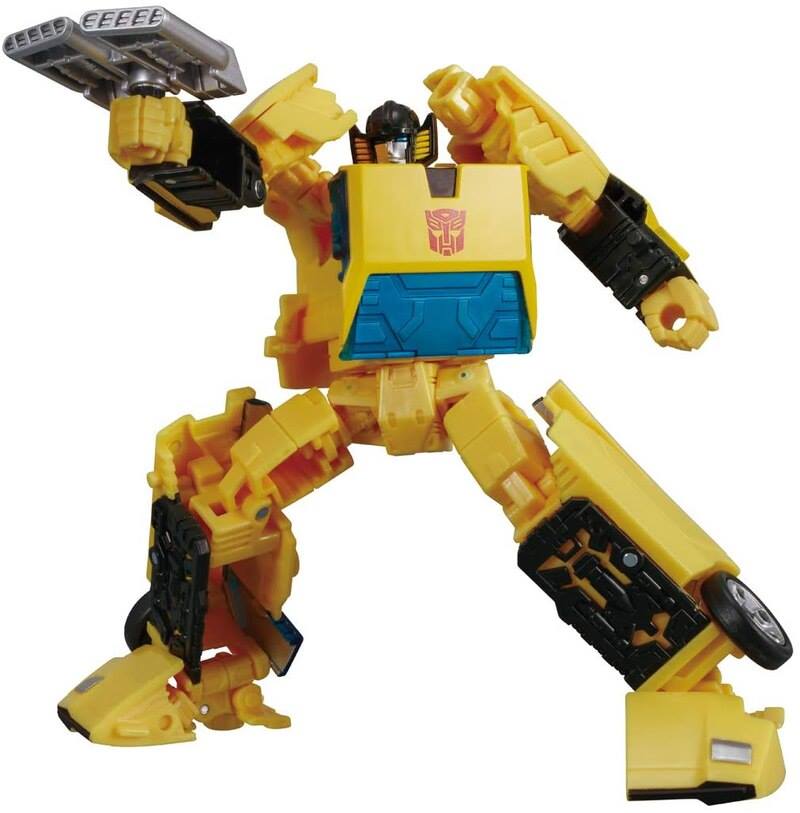 by Warcry
So...this is what passes for Transfomer engineering these days. 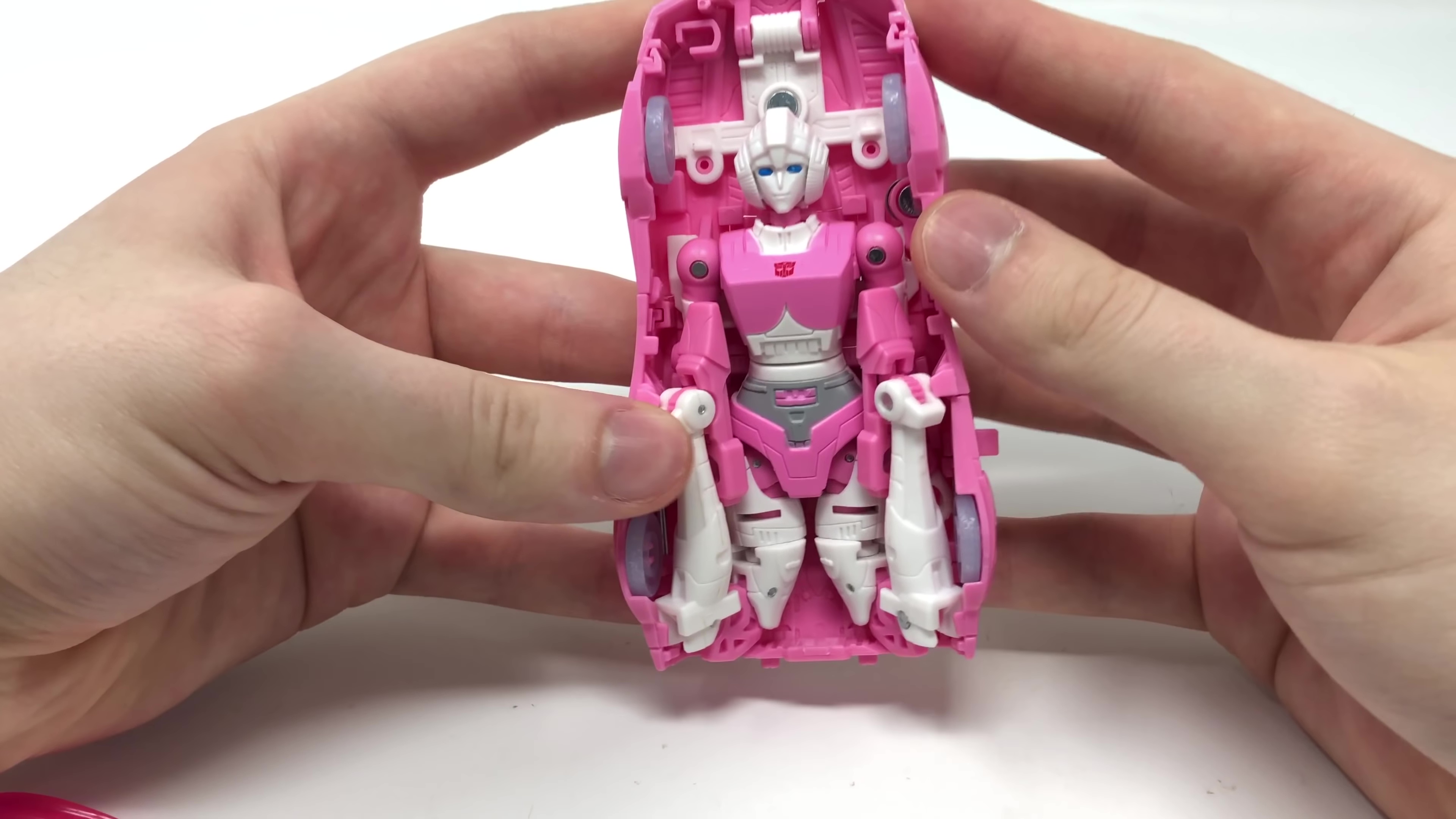 (Pic stolen from TFW, who stole it from a YouTube reviewer)

And don't forget that half the alt-mode just comes off to be a lame hoverboard! I know Arcee is a tough ask since her original robot mode was never designed to transform, but that is just a sorry effort in this day and age. Did Takara hire back the guys that did RiD Side Burn?


Denyer wrote: ↑
Tue Jul 07, 2020 9:49 pm
Anything reckon Sunstreaker's going to be the basis for the other battlecharger?

Considering how utterly in love Hasbro seemed to be with the "two wheels per foot" thing, to the point where they talked about having a great solution to make it work at some convention (said solution turns out to be "fake parts and hiding the rear wheels in his torso") I sort of expect them to just halfheartedly retool Battlecharger #2 from Battlecharger #1.

by Tantrum
I think I saw a prototype Arcee posted on this forum years ago, before the T30 came out. My memory may be wrong, but I recall it being much better than any Arcee released since. I think the key was letting Arcee's legs form the rear of the car, and not getting hung up on the curves not matching the boxy look of the toon. The only mass release Arcee that's interested me at all is the TR one.

by Denyer
This prototype? -- https://i.imgur.com/ukFOsqK.jpg -- I'd definitely have bought one. 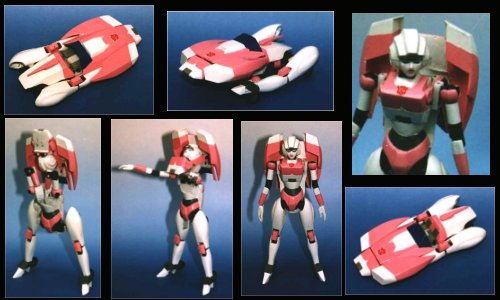 For my money of the ones that have actually been produced, the iGear Delicate Warrior is a lot better than the photos here suggest; http://wikialpha.org/wiki/Delicate_Warrior 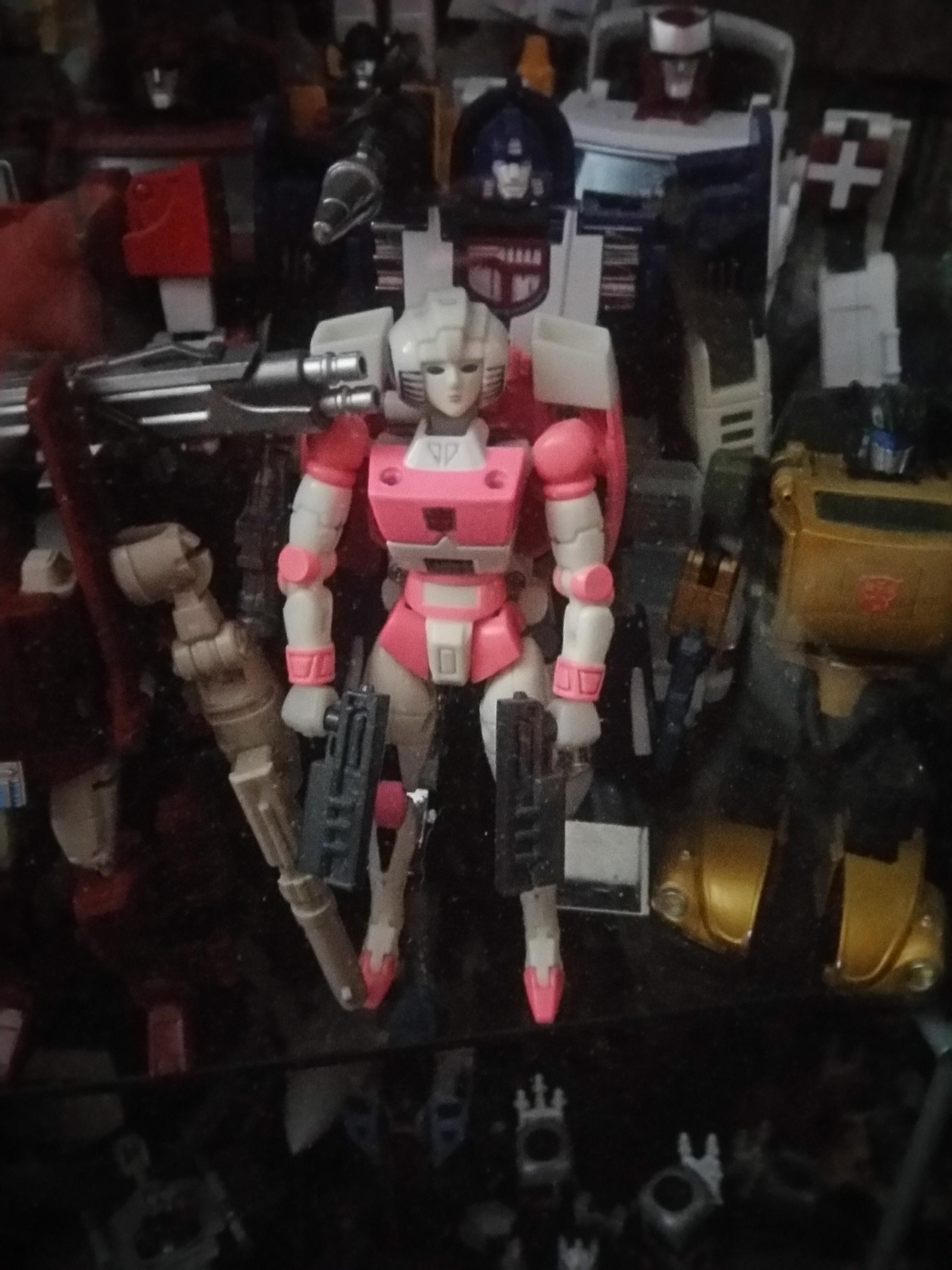 The new one is very much actionmaster in a shell. Which I suppose is alright if someone wants an actionmaster.

by Skyquake87
Bit disappointing to see how hollow Sunstreaker is. I thought they'd just do Runabout using the Runamuck mould, tbh. Their original vehicle modes were similar and Sunstreaker's alt-mode is a bit too slick for a Battlecharger IMO.

As for Arcee, well I haven't seen shellforming that extensive since BW Neo. Is this to make Transformers more action-figurey or something? Agree the old prototype is superior to the ER design.

There have been rumours flying around to this effect for the last week or two. Didn't really buy into it before, but if this is a hoax they did a pretty good job of emulating the Siege/Earthrise art style.

I think I'm seeing Blackarachnia, Scorponok, Dinobot, Primal, Cheetor, Tigatron, what's probably Rattrap. I guess the bird would have to be Airazor, though it looks more eagle than falcon. Probably the Megatron up top is the T.rex one? Curious to see if this is legit.

by Denyer
If it is I'm guessing the ratio of vehicle to animal alt-modes will be about 50% animals.

by Warcry
Would be my guess too. Though with G1 apparently taking over a chunk of Studio Series next year (there have been a ton of 1986 movie characters popping up in SS retailer listings apparently) it might skew a tiny bit higher. My guess is that we'd mostly see quasi-show accurate takes on first season show characters, since they have the most repaint potential and Hasbro probably want nothing to do with chrome Assuming, of course, that it's for real.

by Warcry
Another pile of new toys...

We've already seen Exhaust, Greaspit and Hubcap but I think these are the first official pics? I like Hubcap quite a bit.

Ramjet and Dirge look awful. The headsculpts are ugly and I'd forgotten that Cartoon Ramjet was so white he looked like a Klansman's robes. I'm really happy to say that Hasbro made this an easy skip for me!

Bumblebee being a Walmart exclusive is kinda wierd, especially since they seem to have shelled out to make him a real Beetle. But he really doesn't tempt. Maybe because I have the old G2 MP that does basically the same thing, but better? Seems like a really nice option for folks that don't already have a VW Bee, though.

I assume a million impatient fans are discarding their Siege Soundwaves now that he's been predictably retooled to transform into a differently-shaped box?

Other stuff too. A few reissued Siege and Earthrise Autobots with new damage paint, nice for floks that missed them the first time, and an Elita from that new Arcee.

by Skyquake87
I watched the Fan Friday thing Hasbro did (well, Xortrider's video/ commentary on it) and there was some neat stuff, but I've just not been feeling the Earthrise stuff so much. There's not much to interest me and things I was kind of interested in (the Coneheads) are now easy to pass on as they're 2-packs or exclusives of somesort or another. The Quintesson 5 pack thing looks cool - but I'm surprised Hasbro aren't holding onto the Quints for Studio Series '86, rather than chucking them out in Siege. Still, I could say the same for Arcee.

What did catch my eye is the artwork (which I hope isn't fake) for the purported third phase of Siege which will bring Beast Wars back!

by Warcry
I've enjoyed the handful of first wave Earthrise toys I've gotten a fair amount, but the more we see the less interested I am in the later waves. Between the increasingly predictable redos of characters who just got toys last year, the increasing focus on cartoon robot modes and transformations that are increasingly compromised to make those robots as "accurate" as possible, it really feels like there's been a stark change in direction. I don't get it, either. If Generations is going to be about hardcore cartoon accuracy, what's the point of the new RED line? I want to be excited about Beast Wars, but the more I look at what future Earthrise waves have in store, the more I'm afraid we're just going to get a bunch of low-detail, lazily-engineered partsformers that look just like 90s CGI.

In other Transformers-related news, it sounds like the guy who's been the brand's lead designer since Combiner Wars has been reassigned by Hasbro to Power Rangers stuff. Curious what that that'll mean for the brand going forward.

by Tantrum
Denyer - Yeah, that's the one. I wish that'd made it to stores.

Between Cliffjumper/Bee/Hubcap, Ironhide/Ratchet, and Arcee/Elita-1, it looks like removing a chunk of alt mode as an "accessory" may replace bot limbs under the jet wings as the most annoying category of Hastak just giving up. They could've at least given Ironhide's roof some side panels and made his G1 battle sled.

The only good thing about the Dirge/Ramjet set is that Thrust isn't part of it, so hopefully I can buy the maroon guy I want without figures I don't.

I like Exhaust and Hubcap more than the characters I've heard of that they're redecoed from.

The gaps in Soundwave's forearms wouldn't annoy me nearly as much if there weren't plastic panels attached to said forearms. Couldn't they have figured out some way to have the gaps hidden by the panels?
All times are UTC
Page 92 of 94
Powered by phpBB® Forum Software © phpBB Limited
https://www.phpbb.com/