Warcry wrote: ↑
Sat Jul 18, 2020 5:03 pm
I want to be excited about Beast Wars, but the more I look at what future Earthrise waves have in store, the more I'm afraid we're just going to get a bunch of low-detail, lazily-engineered partsformers that look just like 90s CGI.

I hope not. I would like the figures to look like proper, real life animals. I'm hoping for more of the Generations Rhinox/Rattrap/Waspinator than some sort of cross between the BW Masterpiece CGI look and Animorphs. The CGI look just doesn't work for me on the MP toys.

In what must've been a late change, does apparently have a new head:

by Warcry
That makes a pretty big difference, even if I still don't think that Spinister's mold is the greatest choice for Rotorstorm. I'm honestly surprised that the figures weren't already produced and on the way to retailers when they showed off the prototype, though. Though I suppose this could have always been the plan and the prototype they showed off wasn't up to date, rather than them fixing the head after negative fan reactions.

by Skyquake87
He looks like he has huge eyebrows.

by Denyer
Maybe it's the IDW comics making functionalism a prominent thing (I largely ignored Armada -- although it did headline the fact that Minicons largely just wanted to be left alone) but it's a bit grim having sentient beings turn into ramps, shields, melee weapons, engines, etc isn't it? And it's been there most of the 30-year-plus span of Transformers. 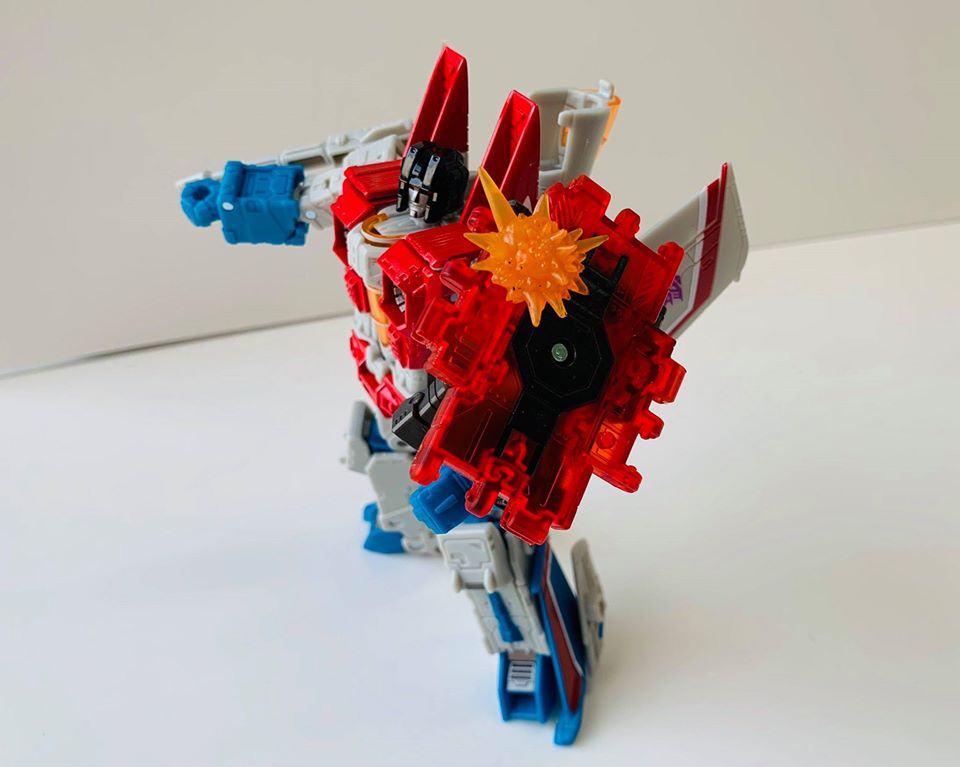 by Denyer
G2 repaint of either the Siege or Earthrise Megatron... tempting to have a more modern voyager one. 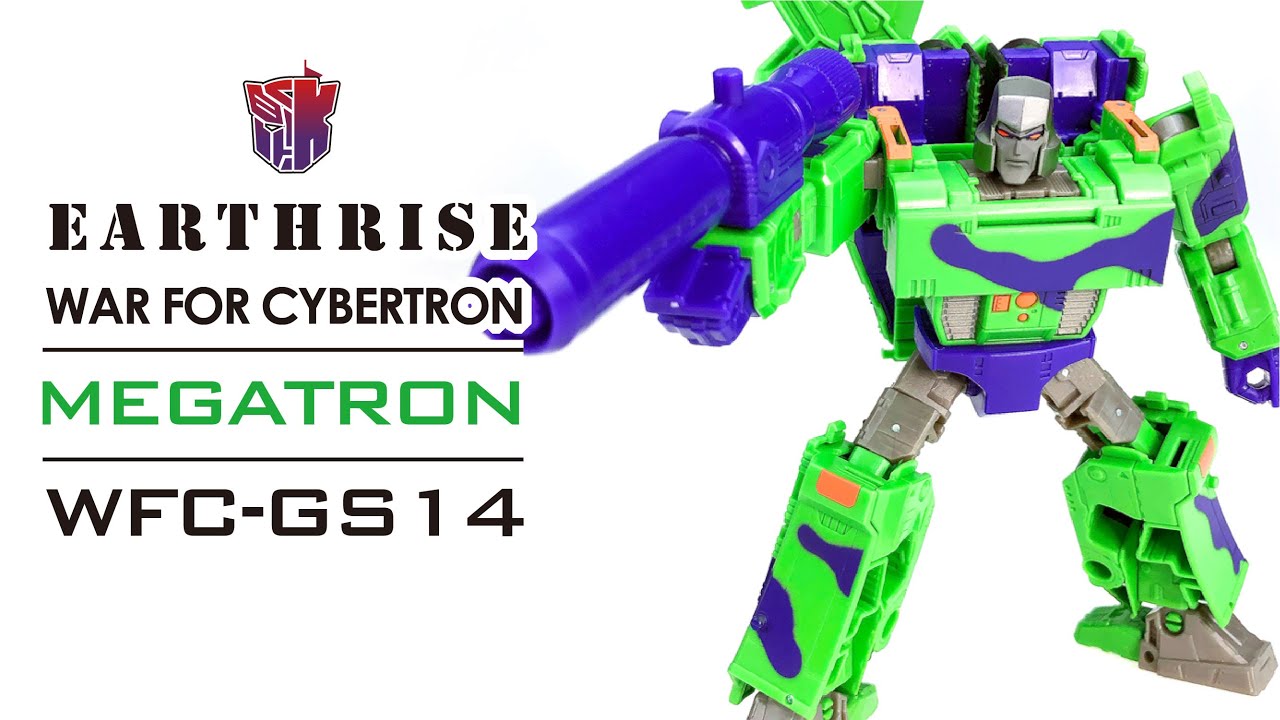 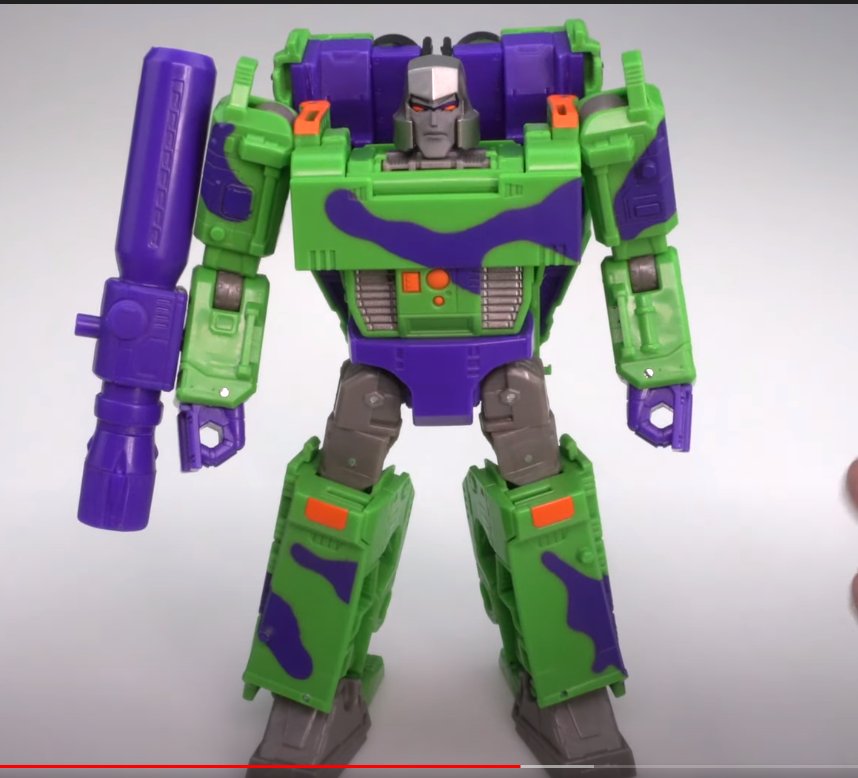 edit: Hasbro Pulse images are around now, and they seem to have realised they needed to show a sort-of shoulder cannon; 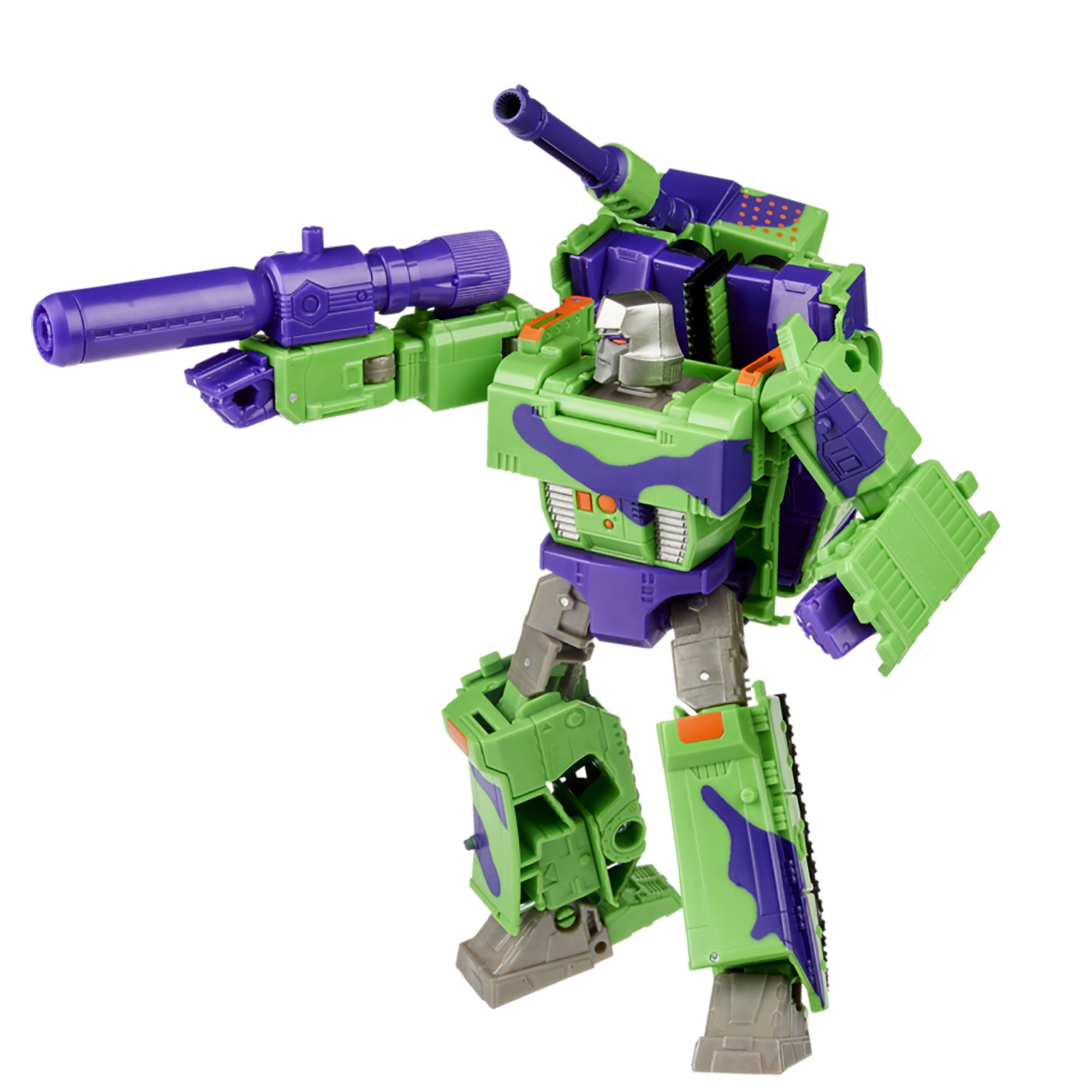 I don't know, I don't really like what they've done with the sword/turret. But I do like that pose.

by Warcry
That looks kind of awful, if I'm being honest. Not the colours, those are beautiful, but that Earthrise Megatron mold just doesn't look good no matter how they photograph it. I'd love to get a good modern G2 Megatron toy but this doesn't do anything for me.

by Skyquake87
It seems strange to say this, but that looks very toy-ish. I think I would have preferred the Siege mould in G2 colours. The Earthrise Megs seems kind of dull to me. Still, nice to see G2 get some continued love here and there.

by Denyer
Obviously what I actually want is the Combat Hero toy updated and in the right colours for a change, but if a way can be figured out to do the shoulder cannon this has some appeal.

by Denyer
Generation Selects Bug Bite (out of Cliffjumper, presumably VW said no to bad guys):

Which looks weirdly proportioned in robot mode. Maybe the alt mode is better.

by Warcry
https://news.tfw2005.com/2020/08/21/g2- ... ive-417624
Preorders for G2 Megatron are live. And also for an unexpected G2 Sandstorm, which never actually made it past the prototype stage back in the 90s. That's a really cool deco I could definitely see myself ordering if they're readily available in Canada!

Also, It's neat that Hasbro is getting better at keeping some of these Selects a surprise until they're available to order. It's a nice change from knowing what's coming so far in advance that it feels old before you can even buy it.


Denyer wrote: ↑
Sun Aug 16, 2020 10:32 pm
Obviously what I actually want is the Combat Hero toy updated and in the right colours for a change, but if a way can be figured out to do the shoulder cannon this has some appeal.

I'm actually really surprised that we didn't get that with Earthrise. You'd think that the G2 transformation would have been a no-brainer when their brief was "tank Megatron with an Earth mode", even if they used the G1 colour scheme for the main line one and relegated the 90s decos to Selects. I'd have happily bought the figure in both green and Hero colours if they'd done that.

Until they get around to that, though, I'm quite happy with Legends G2 Megs with Quake's big gun on his shoulder. 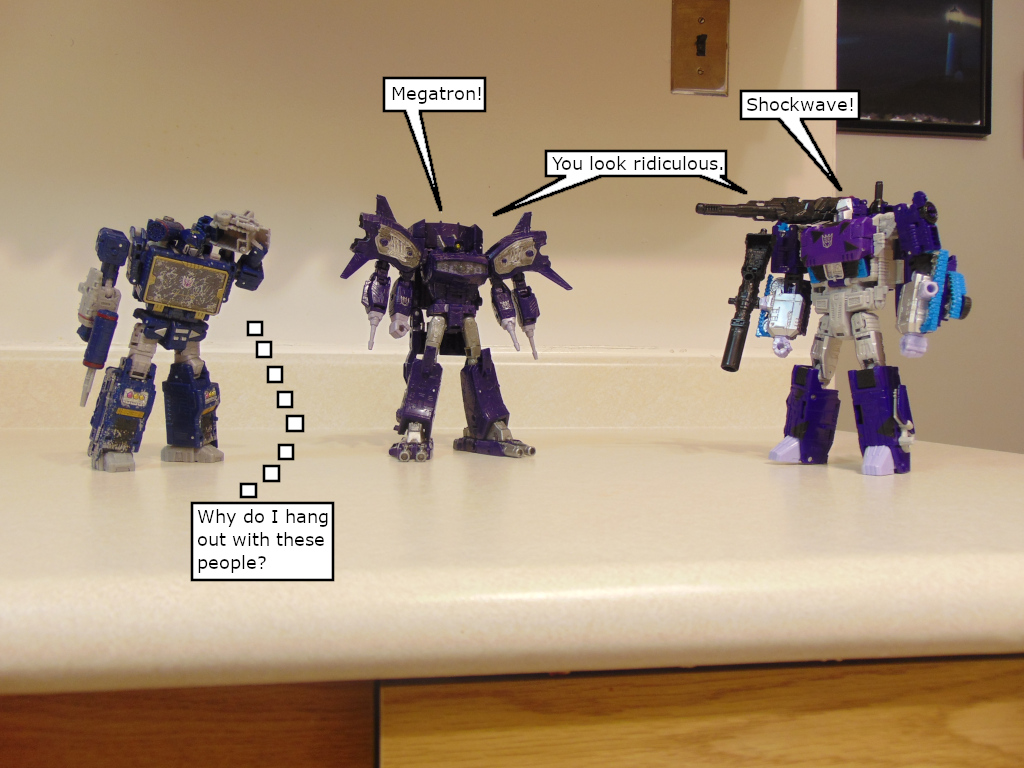 by Denyer
That's an idea with the G2 Megs actually -- I've got a spare Hardhead.

edit: These don't look too bad with the gun on the back -- 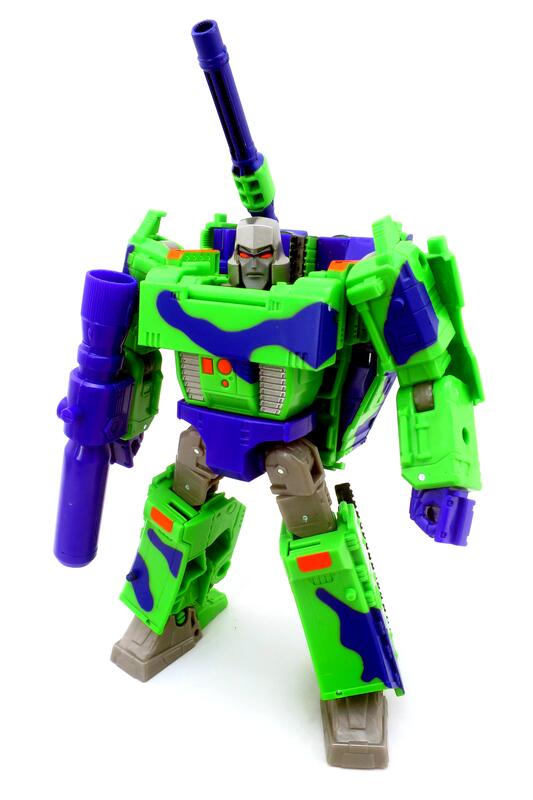 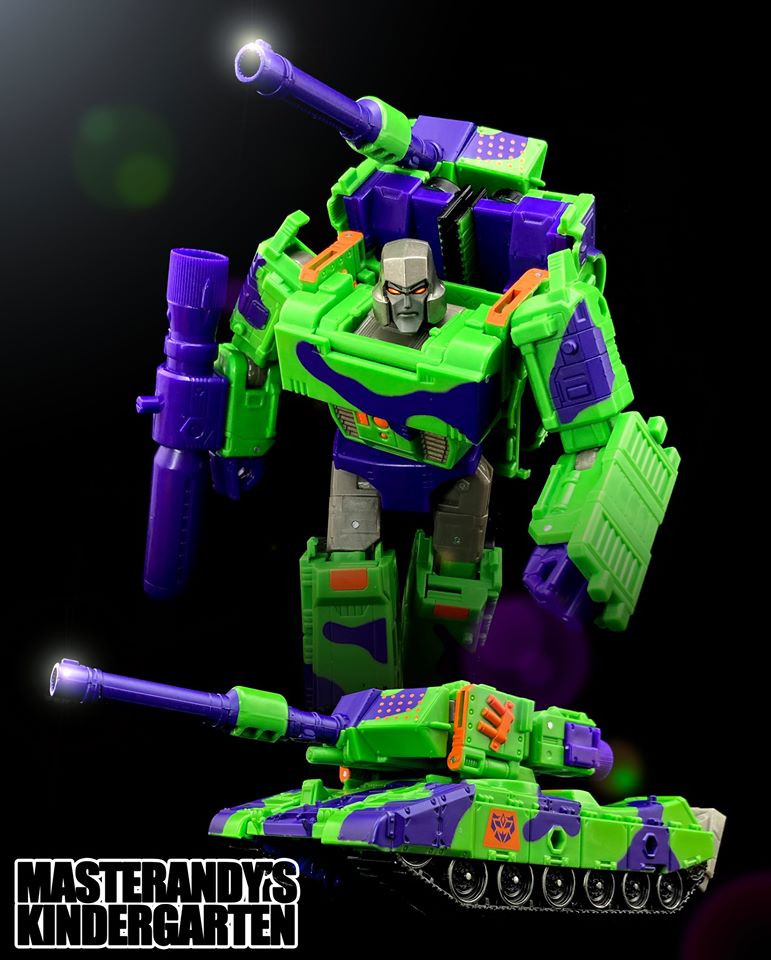 by Skyquake87
I think G2 Megs is one I'd have to see in hand to make a decision on. I want to like it, but it's not doing it for me.

Warcry wrote: ↑
Sat Aug 22, 2020 3:53 pm
Also, It's neat that Hasbro is getting better at keeping some of these Selects a surprise until they're available to order. It's a nice change from knowing what's coming so far in advance that it feels old before you can even buy it.

And speaking of news way too far in advance, Vietnamese factory thieves made off with a copy of next year's Rattrap.

It's a nice take on the character and it's nice that they've brought back the Basic size for BW stuff, but it doesn't seem to do anything the last one didn't do. So, cool for new fans but not exciting for me.

by Skyquake87
Still, promising look at what Kingdom may be all about. 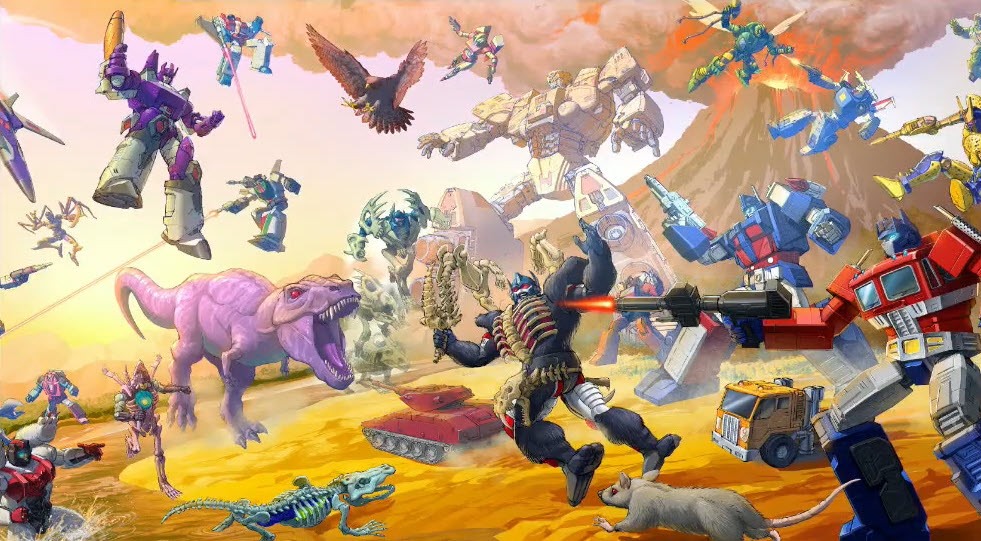 Kingdom teaser showing the fossil "weapon" upgrades (interested in the sabretooth tiger one as well as the therapod one already shown) and in the background you can see what appears to be a Titan-class transforming Ark. Various other characters shown like Warcry, Polar Claw, Huffer, Inferno, Tracks, Gears, another Magnus, etc.

Primal, Megatron, various others including another smaller fossilizer (Vertebreak) and dinky Prime -- 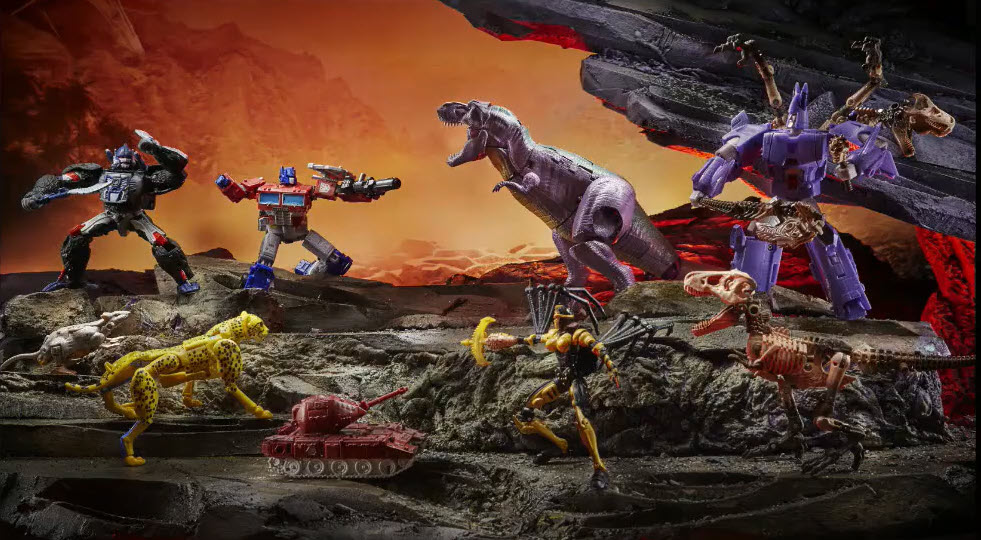 by Warcry
The skeleton-bots look like a fun addition to the ranks. Not quite what I was thinking of when I said that I hoped the line gave us new beast characters, but both of the ones revealed so far look neat.

Blackarachnia, Cyclonus and Megatron also look pretty cool. The other Beast Wars guys are nice too, but I have at least five or six toys of Primal and Cheetor already. And two good Rattraps. It's nice to see Polar Claw in the art. I hope he's actually getting a toy, and not just something they tossed in for flavour!

The Titan appears to be based on the Last Autobot in robot mode, which is a neat Marvel nod.

by Clay
Yeah, the fossilizors (sp?) are unexpected and welcome in their novelty. I hope they're actually neat, too.

Primal and Beast Megatron seem analogous to their masterpiece counterparts in the same way that Earthrise Prime is to the third version of MP Convoy. In other words, smaller, cheaper options that actually hit so many of the marks that it makes the masterpiece option at an order of magnitude more money kind of irrelevant.

Kingdom figures seem to be complete hits for me so far, which is a big contrast from Siege and Earthrise.

Yeah, but these actually seem better, at a glance. Certainly the Cheetor is over the 2008 mold. Waspinator's in the art fighting Tracks, so maybe he's in the line too. Not sure how they'd improve on the 2013 figure, but then I said that about the original before the 2013 figure came out and then had to eat my words. Or maybe they'll do like with Arcee and the new one is just awful.

The Studio Series 1986 movie stuff has been officially revealed.

All those yellow joints really detract from Hot Rod for me. The fact that he's a "Voyager" who's exactly the same size as the line's Deluxes probably makes me less tolerant of little flaws like that -- if they're going to charge an extra-premium price for the thing, I don't think it's wrong to expect them to get stuff like that RIGHT.

Kup looks absolutely nothing like he did in the movie. The basic body shape, the face, the detailing...he really looks like he came from a random other Generations line. Which I guess is fine, but it's also ugly on its own merits.

Grimlock looks like it is heavily based on the MP, which could be either good or bad. The MP looks great but it's very wobbly. If this is more sturdy, it would have a lot of potential. Or at least, the obligatory toy-style Selects repaint with gold paint and a sword would...

Jazz and Blurr are cool but they fall squarely into the "I really don't need another toy of this character" category for me. Scourge probably should too, really, but it's not like there's only one of him...

The TR reissues are a bit surprising. I might be tempted by a Chromedome with the Takara head, but at the price they'll likely go for, probably not THAT tempted...

Also, with all the reveals lately retailers have let slip that prices are going up in Canada yet again next year...$33 for a Deluxe and $45 for a Voyager. Yuck.

by Tantrum
One of the links has a pic of Hot Rod next to Blurr and Kup, looking about the same size. But, the other link says the Deluxes are 4.5 inches, and the Voyager 6.5 inches. I hope the 4.5 inch listing is the error, as that's way too small for a Deluxe. Even Siege Red Alert, who'd a head shorter than Spinister, clears 5 inches easily.

Do Thrust's wings not flip up like Starscream's? That was the only Voyager seeker I was interested in, since I don't like the CHUG's removable VTOL engines sitting on top of the wings instead of the wings going through them. But, with the wings not flipping up, the tiny pinhead, bland deco, and ridiculous knee-pads, I'm not interested anymore. All they had to do was make the CHUG bigger, and embed the VTOLs in the wings.

One photo of Scourge shows much more contrast between the light and dark blue than the other. I'll have to see it in person. But, that might not happen since the Walmart near me has just enough maskless people to make browsing for toys not worth the trip.

Grimlock looks pretty good. I don't play with the MP since he's a bit unwieldy, so a smaller version would be nice. But, like Warcry, I'd prefer a toy accurate deco.
All times are UTC
Page 93 of 94
Powered by phpBB® Forum Software © phpBB Limited
https://www.phpbb.com/