Chat about stuff other than Transformers.
Post Reply
1434 posts

Marvel Legends Bishop and Omega Red finally arrived from Amazon, after them making confused promises about how they'd be here any day now since late June. Probably my last Marvel figures of the year, since EB Games have suddenly decided to sent one-per-store out of their exclusives (so I'll probably never see The Thing or Archangel Bishop is one of my favourite designs, if not quite one of my favourite characters -- he's cool but his arc never really seems to go anywhere. And he comes off great in the plastic. His glorious 90s mullet does hamper his head movement a bit, but nowhere near as much as you'd expect. He's got up-down wrist hinges, way better than the side-to-side that Legends usually get for a weapon-wielder, and the futuristic space-shotgun that he comes with works better for him (a dude from the future) than the space-guns that come with some of the other, more grounded Legends figures. His costume is basically a bunch of overlay parts over a standard "big guy" Legends torso, but he pulls it off way better than 90s Cable did. I was really looking forward to him and he doesn't disappoint. From the head sculpt on down, the figure looks like it jumped straight out of a mid-90s X-book.

I wasn't anticipating Omega Red nearly as much, but now that I've got them both in hand, Arkady is definitely my favourite of the two! His head sculpt is just as good as Bishop's, his costume overlay works just as well, and his swappable Carbonadium coil accessories are surprisingly dynamic (especially after how relatively disapointing Doc Ock's tentacles were). But what really makes me love the figure is the new torso it's built on. To the best of my recollection none of the previous "big guy" Legends molds have had the butterfly swivel, and it's amazing how big of a difference it makes here. The only problem is that the joint itself is actually quite unsightly, and when this torso eventually gets reused on a figure that doesn't have Omega Red's huge shoulder pads, that's going to be pretty obvious. So while it works great for him, it may not be quite as good an addition to Hasbro's body library as fans were hoping.

As much as I like Punk Storm, 90s Wolvie and modern Magneto, I think these two are far and away the best X-figures I've gotten this year.
Top

So I got the super colossal Tyrannosaurus Rex made by Mattel.

It's been sitting in the HLJ private warehouse for two months because, well...

It only cost like 50-60 euro which wasn't so bad, but the shipping was more than the toy itself, and then I got slapped with customs on top of it, so the whole thing ended up costing me about 2.5x the amount of the toy itself, and to add insult to injury, 1.5x as much than I'd spent if I simply bought it domestically. Which I would've had I known it was going to be actually stocked by anybody in Finland.

The only solace I can take is that at least I could split the costs over several months, but I still feel like a dumbass.
Top

Batman Missions Harley Quinn
This caught my eye in The Entertainer's current sale. £8.00 for one of the nicest action figures Harley Quinn has ever had. The design and headsculpt are very much based off the work of Amanda Connor, and the character's Rebirth design. I'm not familiar with this line from Mattel - in the era of SHFiguarts, its easy to overlook more mainstream fare aimed at actual kids, rather than grown up ones - but this seems to be a line of decent looking figures without the usual clutter of nonsense gimmicky weapons. Articulation is basic, but nevertheless, this is a great great action figure and I'm really impressed with her.
Top

Usually, I'll try to make some progress building the thing on the box without looking at the directions. When I got the carousel a few months ago, I built all the animals on my own, and used the instructions for the main body, sicne I didn't want to screw up the crank mechanism that turns it. Here, I went straight to the instructions. They put a lot more thought into structural integrity than I would've figured out from exterior shots.

Edit: I've finished the whole thing, and it looks great. Voltron has articulation at the shoulders, elbows, and wrists, one axis at each point. The shoulder joints are ball joints connected to a gear, to support the weight of the arm. The elbows and wrists are each a pair of ball joints, like that giant Construct-Bot Grimlock's ankles. Voltron can also turn his head side to side almost as much as a person can.

The black lion partsforms at the hips and shoulder (5 parts total) to become Voltron's torso. He's designed well enough that nothing comes off inadvertently. The shoulders are color coded on the inside so you don't swap them by mistake. This isn't too bad for converting to Voltron, but does lmit the black lion's articulation. Also, the black lion's forelegs just kind of hang there, and don't fold out of sight at all.
Alleged "poems"
that don't follow a rhyme scheme
are not poetry
Top

Ooh I want to get that. I've always been curious about the original Voltron Lion combiner since I saw one at a friend's house about 30 years ago or so, but they're silly expensive. Seen some reviews of it and it looks awesome, so the Lego one looks like it'll scratch that itch.

But that'll have to wait as I used some vouchers from work to pick up Lego Technic 42078 Mack Anthem. I've always wanted one of the massive Technic sets, and at over 2,500 pieces, this'll do the job, especially at £40 off at Argos. Built the cab (took me 6 hours..!). It's bloody ace. Massive, but not unwieldy and I like that its pretty closed up. And it has a steering wheel in the cab that actually does the steering, which seems to be a novelty on a lot of Technic sets these days. Started work on the trailer, which has all the clever stuff with lifty bits and a lockable container. B-model also looks cool, but bit annoyed its bloody PDF download instructions for that. BOoooooOOOoooooOOOOooooo
Top


Skyquake87 wrote:But that'll have to wait as I used some vouchers from work to pick up Lego Technic 42078 Mack Anthem.

Remember 5571? I had forgotten it wasn't even a Technic model. It was one of those sets I'd drool over in the catalogs - so much that I even had a dream about it once and boy was I upset when I woke up

Skyquake87 wrote:Ooh I want to get that. I've always been curious about the original Voltron Lion combiner since I saw one at a friend's house about 30 years ago or so, but they're silly expensive. Seen some reviews of it and it looks awesome, so the Lego one looks like it'll scratch that itch.

The original Voltron's wings had a tendency to break off, so complete ones are pretty rare. The LEGO one's much bigger. The Green and Red lions are Voyager sizes, Blue and Yellow are almost Leader size, and Black's even bigger. The star on LEGO Voltron's belt is eye level to a CW combiner.

There's some design compromises in the Black lion, but not enough to make him dissapointing. The parts forming for transformation isn't too bad, since it's designed well enough to searate only where it should, without any other pieces coming off. The wings don't fold down very flat in lion mode. The lion neck is long, since it can't collapse like the original.

Voltron's face isn't concealed in lion mode. It just forms the jaw. Volton's eyes are visible from the sides and underneath, and the jaw is blck and grey instead of white. When I was making my 7" LEGO Voltrons a few years ago, I got stuck on that and eventually just stuck a blue tile under the jaw. I feel better about that now, seeing the pros had the same issue.
Alleged "poems"
that don't follow a rhyme scheme
are not poetry
Top

The compromises you describe sound fair and the pictures / reviews I've seen make this a fun looking set, so definitely one to pick up when I have the cash.

@Tetsuro, yeah the Mack Anthem is very reminiscent of those old Model Team sets (which still look incredible). Speaking of which, I finally got this built and it's awesome. I love the winch arms and loading/ unloading the crate from the trailer. It's a really great looking model and fun to play with. Probably not one of the more complicated Technic sets out there, in terms of what it can actually do, but a great education in construction and how things work if nothing else. It'll probably be a while before I can face dismantling this to the try the B-model (which also looks awesome) though!
Top

Lego Jurassic World 75932 Jurassic Park Velociraptor Chase - I like to tie things together so I bought this in the same time frame that I bought the movie.
Destruction is my specialty
Top

Well I finally managed to pick this thing up - MISB no less - for a non-stupid price. 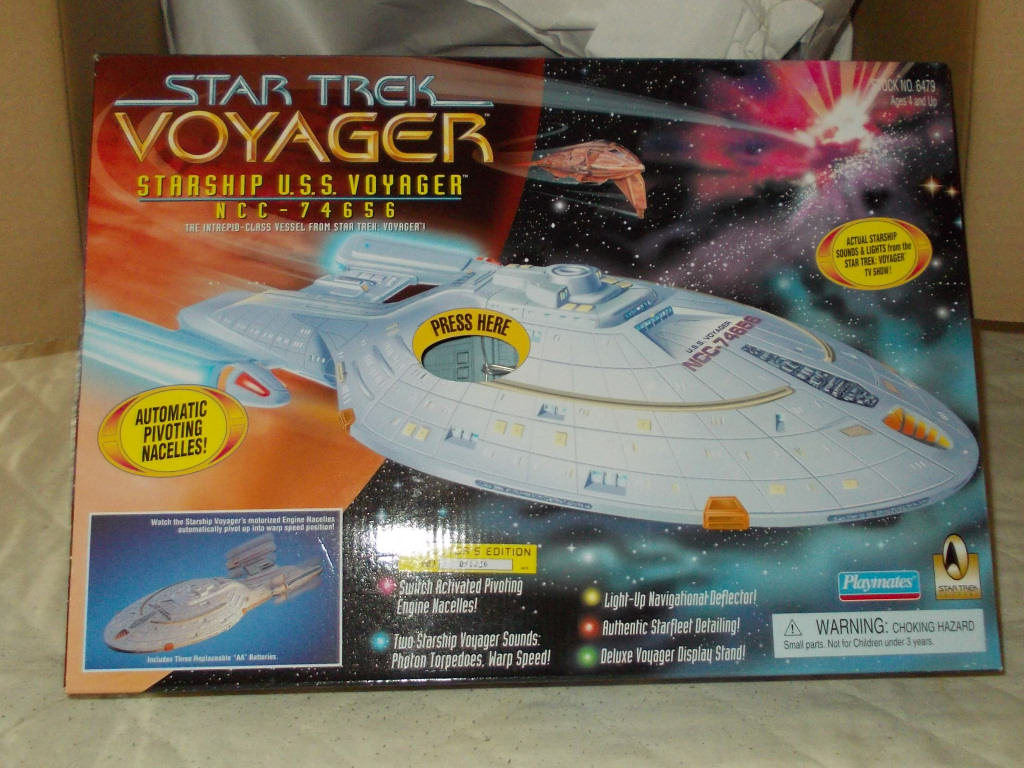 Damn! Good find. Do the lights and sounds all work?

I've got a couple of the ships still from when I was a kid (the Generations Enterprise and a Klingon Vor'cha), and I'm really impressed by the detail on them. They're almost as good as the model kits I used to build.

I've been thinking of getting into Playmates Trek again, at least to replace my TNG crew, some of whom have some serious play wear. And maybe get the DS9 crew as well. Though in their case, I'm a bit disappointed that most of them (unless I've missed something) only have season one figures and not their later, more distinctive looks.
Top
Post Reply
1434 posts