Chat about stuff other than Transformers.
Post Reply
1434 posts

Warcry wrote:Damn! Good find. Do the lights and sounds all work?

What surprised me the most was that the 20+ year old demo batteries had not only not leaked but still had enough charge in them to operate it. After only about a week or so tho they were clearly no longer up to the task so I swapped them out and it sounds much better, even the motor. In fact, the sound effects are almost deafeningly loud.

Voyager was kind of a turning point for me because it was the hardest to get so I didn't feel comfortable buying the other ships having this gap in the collection, which has now been patched, so I might actually look into getting the DS9 and Defiant as well.

I'm still uncertain about collecting the action figures tho; I always found it strange that TNG was the only series to be blessed with playsets (which are likewise quite hard to find at a reasonable price), but they didn't introduce mid-thigh swivels that'd let them sit properly until much later. The TOS crew is conveniently sold as a box set but since all they got is the shuttle Galileo, there's little for them to do besides stand on the shelf, ditto for DS9. While I can understand DS9 not lending itself well to playsets, Quark's bar would've added some great cross play value.

Actually I might just buy the TOS crew box and Galileo, that'd be a quick way to start up a collection.
Top

Lego Anakin's Jedi Starfighter 75214. Got this as a gift from my wife. It's a lovely little thing, that's really solid when all put together. I've already got his starfighter from way back when ROTS came out, so this is a nice change. I love that it has a spot for lightsaber storage (which the Yoda 75168 one does not). It's a nice set, and glad that it's from my favorite incarnation of Anakin.

Lego Technic Ultra Light Helicopter 42057. Got this for pretty cheap off Amazon. Looking forward to building it with the kids to teach them a little engineering. It has two moving rotors and pistons that pump in its tiny engine. About 25 years ago I did a lot of Technic but moved out of that as I grew older. Should be a good teaching tool for the kiddos.

Lego Ideas 21311 Voltron
What a fun set this is! Loads of bricks, some top looking robot cats at the end of it (even if the poor old black one looks like more of a bear) and a fantastic looking combined robot mode. Makes my POTP Predaking look a bit sad, in all honesty. Whilst I'm no fan of the Ideas platform being constantly used to peddle 'what if X licensed property was done in Lego?!' , I'm really happy with this. Its bright, colourful and incredibly substantial. I went for this on Black Friday so got double Lego VIP points and also got a cute free Christmas themed set thrown in. It's a present that opens up to show a nice wee scene of a child and their parent enjoying Christmas.
Top

Classic 1984 Lion Force Voltron boxset - The plastic looks a bit cheap, it could probably done with some additional paint.
Destruction is my specialty
Top

Star Wars Black Series Jaina Solo
Cool looking figure I spotted in Asda earlier in the year and picked up half price from Kapow. She's a really nice looking figure in a highly detailed flight suit, with a light sabre, blaster and helmet. I like her cocky smirk.
Top

Some Christmas (and Boxing Day) acquisitions!

Marvel Legends Archangel is the first of Hasbro's new "deluxe" offering. As best as I can figure, "deluxe" is being used to mean "too expensive to be costed into a regular wave", though in Archangel's case I think it might be phrased more simply as "wouldn't fit in a regular box". At any rate, he winds up being $10 more than a standard Legends figure here in Canada. Surprisingly, he actually feels like he's worth it. The wings are huge, and he also comes with four different choices of head (standard Archangel headsock, Horseman of Death mask, unmasked normal Warren and unmasked crazy Warren) and an extra part for the Apocalypse build-a-figure (a huge claw that replaces his right hand*). It actually does feel like 1/3 more than the standard Legends figure gets, and if future "deluxe" releases are this jam-packed I think it'll be a pretty successful sub-line. I'm not sure that any others have actually been announced just yet, though. It's not my favourite look for Warren (that would be the blue-skin, feathered-wings look from the late 90s), but it's definitely the definitive one and I'm glad that Hasbro went all-out instead of pinching pennies to try and fit him into a standard wave.

*When the Apocalypse wave came out and fans were griping that he didn't have any shapeshifted weapon-arms, I really didn't see the need for it. But now that I've got this? I totally get it, and I doubt the normal hand will be going back on any time soon.

Marvel Legends X-23 was an impulse buy on Amazon when she hit around 1/3 of retail on Boxing Day. I actually did think about buying a figure of the character this year, but they released this look and her Wolverine look in short order and I wasn't sure which one I liked better, so I wound up not buying either. But the huge discount was enough to bring me around on this one, and (aside from awful paint QC that took a few minutes of delicate work to fix) I'm glad that I did! The black and grey outfit is very eye-catching in person, the head sculpt is really convincingly pissed off in a way that none of the male Wolverine sculpts have ever quite managed, and the detail-heavy boots really help her stand out.

Marvel Legends Malekith is a figure that caught my eye from the get-go, but they release so many new Legends every month that I try not to pick up figures of any characters I'm not familiar with. Things get expensive really quick if I do. And aside from that truly awful Thor movie and one random X-Force annual, I don't think I've seen Malekith in anything. But when he hit 1/4 regular price I figured, why the hell not? He's got a mental design, with a whole "Let That Be Your Last Battlefield" thing going on, a psycho grin and a giant freaking sword. What's not to love? Well, unfortunately the answer to that is "his costume overlays". If you raise his arms above the shoulder it makes his shoulder pads and necklace move all over the place, and his skirt is rigid enough that it starts to look silly if you have his legs in anything but a conventional standing pose, and if you leave him in those poses long enough it'll deform the skirt so that it no longer falls naturally when he's standing. That makes him less fun than I'd expected, but still more than worth the $8ish I paid.

The Black Series Praetorian Guard, on the other hand...less so. He wound up being $7.something and even then he feels like a bit of a rip-off. He's got terrible articulation -- arms with almost no elbow range, and legs restricted by an even bigger, bulkier skirt than Malekith's. My copy also manages to have paint smears in random places in spite of the figure having no paint apps of any significance. I'm continuously disappointed by any Star Wars figures I end up buying, and I don't understand how the Black Series can be so consistently mediocre when the same company produces and sells vastly superior Marvel figures. I know they can probably justify sinking more money into R&D work when they're sculpting new bodies on the Marvel side of things, where they can convincingly repaint and retool the same dozen or so bodies time and time again since superheroes all basically have the same physique. But you'd think that the lessons that the Marvel team learns would be applied to the Star Wars stuff. But clearly not.
Top

I'm also puzzled by the soft focus waxy look the fleshies in the Black Series line have. I only have Sabine Wren and Jaina Solo but their faces just don't look as solid/ good as the Marvel Legends stuff.

Whilst the 6" scale is an expensive puzzlement on this front, their 3.75" figures are fantastic. The recent Force Link stuff is now all on heavy discount everywhere and I picked up Qi'Ra and she's fantastic for the £3 i paid. Excellent likeness, good quality materials and good sculpting and detail.
Top

Skyquake87 wrote: ↑
Sun Dec 30, 2018 7:15 pm
I'm also puzzled by the soft focus waxy look the fleshies in the Black Series line have. I only have Sabine Wren and Jaina Solo but their faces just don't look as solid/ good as the Marvel Legends stuff.

I've avoided unmasked Black Series figures for just that reason. Even when they get the mold likeness right, there's still something...off about the final look and "waxy" is a great way to describe it. Thrawn's the only one I've actually gone ahead and bought, and him being an overgrown Smurf helps some but he still seems a bit low-res compared to most six-inch stuff I own. Apparently they've started using new tech to make the faces look better (and, in fact, are reissuing a lot of old toys with improved face printing), but I haven't paid close enough attention to see if it's actually made much difference. The armoured characters are the only designs I really care for anyway.
Top

Someone got me this for Christmas...

It's kind of like being back in the 80s, with movies being adapted into kids cartoons and Alien/Terminator/etc toylines springing up. Playmobil Terror Dogs are a thing for instance --

Those are brilliant. I'd seen the Ecto-1 set they'd done, but didn't know there were other sets.
Top

They did a Slimer with a hotdog cart as I recall, plus the Firehouse
Top

There's quite an extensive range; 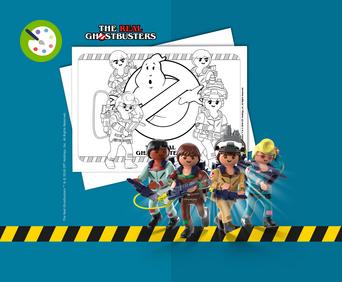 ...looking at those, I wish I'd kept my Extreme Ghostbusters figures. I loved them. They looked more like Centurions with their massive power pack thingies. Never saw the cartoon show though. I always forget about Playmobil beacuse it only seems to show up in small independent toy shops in my region.
Top

The Extreme cartoon's pretty good from the episodes I've seen (whatever was put out on DVD) -- certainly more nuanced and rounded than the tokenism some have picked on it for. Always liked the franchise element to Ghostbusters personally and the thousands of hardcore fans worldwide who cosplay and do charity events (but wearing their own names, not the original four) seem to agree.

Don't remember Playmobil being particularly big over here, it was always more LEGO that occupied its niche with the big selling point of also being a general building system.
Top
Post Reply
1434 posts