Chat about stuff other than Transformers.
Post Reply
1446 posts

Ordered this online since the price was right. It comes with Luke Skywalker/R2-D2 as well as Biggs Darklighter/R2-Q2 plus extra plates with stickers to make the ship Red 5 or Red 3 depending on the pilot. Pretty awesome!
Top

Both sets I bought off Amazon has they were 20-30% off on there.
Top

I was pretty stoked when Hasbro made the Walgreens-exclusive Fantastic Four figures, which were carried by EB Games here in Canada. Not so much because I was a big F4 fan, but because I figured it would be an easy team to build and be done with -- four core members, five if you include Doom and at maximum, six if they ever do a She-Hulk in the outfit. Little did I know...Sue and Johnny were easy to get. In fact, I'm pretty sure I can still find them for sale if I was of a mind to. I guess that convinced them not to import very many Reeds, because I never actually saw one -- I only got one because my wife picked it up for me. And Ben? Ben wasn't going to happen. He was so short-shipped in my area that, if I remember right, some stores didn't even get enough to fill their preorders. They sure didn't have any available for walk-ups.

Thankfully Disney bought Fox, so now Hasbro is allowed to acknowledge the F4 at mass retail instead of as exclusives to pharmacies/video game stores! And while the modern, mostly-black outfits they chose for the team seem like a really odd pick (I would have expected the vintage blue-and-white look since they did blue-and-black for the exclusives), it really doesn't make any difference for The Thing since he's just wearing a pair of shorts. He fits in with the Walgreens crew, at least as well as they fit in with each other (I still can't believe how badly they matched the blues on Reed and Sue). Or at least he does colour-wise. I don't really remember Ben being seven and a half feet tall, so the colossalness of the figure is a bit of a head-scratcher. But the sculpting is great, the grumpy head sculpt is spot on and in spite of how bulky it is, the figure is quite poseable. And the huge feet make him easily the best-balanced Legends figure I own.

It's hard to call something a figure of the year candidate when we're only 10% of the way in, but he's solidly better than any of the Legends I got last year. And last year had some really good figures! A bunch of el cheapo BTR-80 APC quick build kits. They're not fit to be displayed as models, but man, they'll look good enough on a wargaming table.
Top

Some of these things. Should've just bought a box rather than a few in-store and others on eBay, but didn't want to clear them out as they're about the only affordable thing for kids -- ended up with one each of the Smurf primaris (surely should've been the most common?), Grey Knight, Eversor (unfortunately) and a couple of Skitarii. Then nabbed some Sisters and another Skitarii for some small squads. 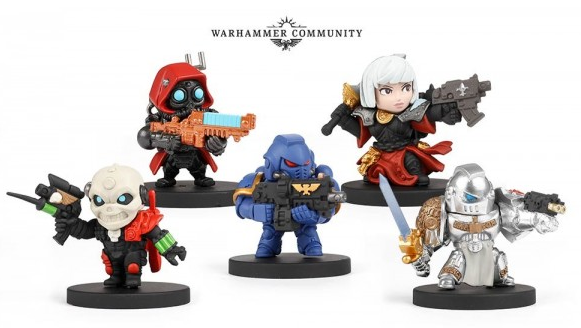 Feels like GW is missing a trick there apparently not being any really quick & simple game rules. I'm sure there's homebrew though. Also leaves xenos players out in the cold, as with almost everything else W40K.

If you haven't been following the licensing deals, there are McFarlane marines coming as well as the big premium Bandai one, apparently in the $20 price range with ready-primed ones available for painting -- which don't look very poseable, but are a lot cheaper. Don't think I'll bother unless they move on to other figures (got in on the earlier pre-order). 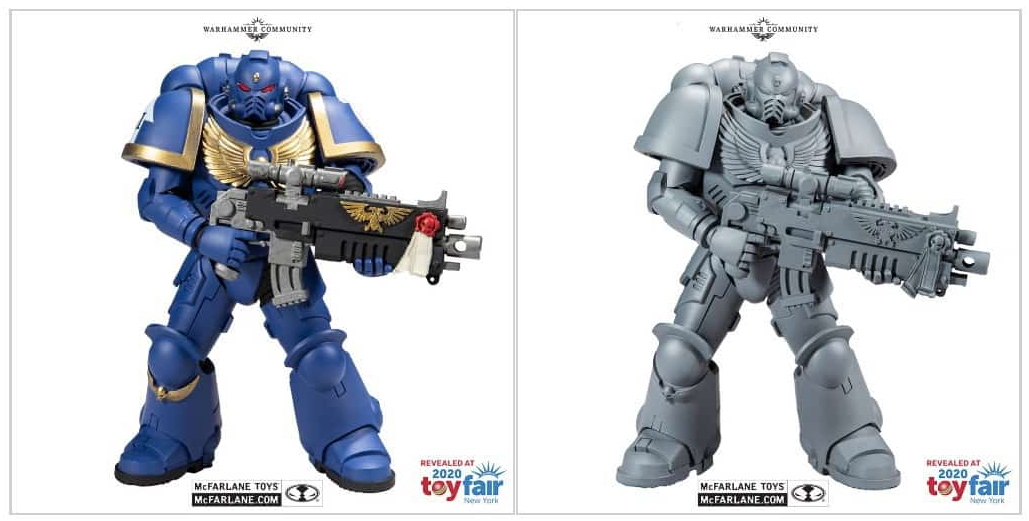 It's a damn shame all of this stuff only covers (and is only likely to cover) nu-marines, unless you count the GK chibi.

Lego Star Wars 75155 U-Wing Fighter from a local shop. Got it used at a great price, with all the minifigs. Near as I can tell, it's only missing the two stud shooters from the inside troop compartment, which should be easy to replace. Great quality too. The ship itself is pretty fun, and bigger than I expected it to be. It scales nicely with my other Rebel ships, too.

Lego 75153 AT-ST: Bought used from a local store. Great AT-ST with a rotating hull and 3 good minifigs including Baze Malbus, all from Rogue One. Came pre-assembled, since that's how they display them in store for purchase.

Lego 75152 Imperial Assault Hover Tank: Same as above, but disassembled in parts. Came with the box and instructions. Haven't built it yet, but it looks awesome and comes with two Hovertank Pilots and Chirrut Imwe, again from Rogue One. Chirrut looks especially fantastic!
Top

75257 Millennium Falcon: Excellent ship. Lots of pieces and a fun build. Incredibly sturdy too. The typical gaps on the top are minimized and you can fit a ton of minifigs in the inside. The cockpit is a little cramped though. Came with Lando, Chewie, Finn, C-3PO, R2-D2, D-O, and Boolio. Not a bad mix, but I would have preferred a Jannah in there instead of Boolio.

75094 Shuttle Tydirium: I was going to get Krennic's shuttle first, but this one was comparable in price and much more iconic. Great build, and it was only missing 3 pieces (used set) that were easy to replace. Came with Han, Leia, Chewie, and two Rebel soliders (Endor). Since there's no other markings on it, it can easily be converted back to an Imperial shuttle that can carry some of my Imperials including Vader & the Emperor.
Top

Marvel Legends Cosmic Ghost Rider
Yay! Cosmic Ghost Rider! The bike is huge, way bigger than the earlier Johnny Blaze GR I picked up, and the figure is really nice. I love the daft idea of this GR riding around in space with a helmet on. It's just funny. The figure is neat. I like the blood red shoulder pads and the spacesuit armour, which is also shaped like a skull. The Kirby-esque '60s design touches are all there on the bike - which is a big energy ball at the front and then all cool retro-futuristic design touches, leading to these massive exhaust pipes and a rocket engine. I like the stand this comes with, so it can get some ground clearance. For accessories, there's a couple of blasters Ghost Rider can wield (they shoot cosmically powered hellfire, two blobs of which the figure comes with), as well as the chain. I'm really pleased with him. It looks very impressive out of the box and I've just had this sat on the coffee table looking mental and badass all at the same time

Lego Star Wars 75267 Mandalorian Battle Pack - I bought this in reverence to May The Fourth, 'Star Wars Day'.
Top

Masters Of The Universe Classics Multi-Bot
This is fun! I loved the original toy when I was young (picked up from a Spanish market, IIRC) and this does the same job, only with articulation for the limbs and whatnot. Best of all, you've basically got 2 full action figures and ton of parts to make your own monstrous creation. Sculpting is nice, as is the paintwork. I like the recreated box art, but am disappointed that the box itself is glued, rather than a taped flap, so you make a bit of a mess to get into the box. I'm not normally mad for packaging, but this is nice stuff, so it's a shame you have to destroy it to get to the figure.
Top

A few Lego things over the last handful of weeks:

Major Vonreg's Tie Interceptor (75240): Nice ship, great colors, fun build. Not a whole lot of play features aside from swooshing and missile shooting, but that's to be expected. The wing design is awesome and very solid for swooshing. Came with Vonreg, Leia, some dude named Kaz from the show, and a fun droid named Bucket. Great set on a discount.

Death Star II Battle (40407): Free from Lego's website for May the Fourth. Not a bad set, but definitely nothing to hunt down. It's a little micro space battle on the surface of Death Star II from ROTJ, with a micro A-Wing and Tie Interceptor. Not bad as a freebie.

Darth Vader's Castle (75251): As seen in Rogue One. Great set, price is a little steep though. Nice sleek and imposing look on the outside. I love the orange lava stream flowing out. It has 4 levels: a Tie hangar with a Sith holocron area & mouse droid with hidden lightsaber hilts and kyber crystals. The hangar houses a chibi Vader's Tie, which inspired me to build a bigger one. But the chibi one is great for this set, and functional! The main floor has a bacta tank area with an 'undressed' Vader and a couple royal guards. One upper level has a meditation chamber, and the last level is for an outlook / defense blaster. I'm pretty pleased with it, as it's great for display and also has a lot of play features.
Top

Masters Of The Universe Classics Glimmer

I really like Glimmer. She all kinds of purple and blue and looks awesome. The figure's perhaps a bit flat in the face - a problem all the female MOTUC figures seem to have - but is lots of fun, otherwise. She's got a nice metallic sheen to the blue parts of her costume. Her jewelled staff is really nice and she also has a crystal ball thing that she can hold. Although I've had to put that away as the cats keep playing with it. It's not a toy (except it is. Shhh!)!!! A really nice figure overall and I'm pleased to have her. I think her and MultiBot will be it from this line for me. The figures aren't cheap to come by these days and I was lucky to get these two for less than £50.
Top
Post Reply
1446 posts