For TFN's Big Broadcast Weekend, I have decided to do one of my blind charity auctions in aid of their main charity, Mary's Meals.

It's the Titan books hardback of Dark Star, containing Marvel US issues 46-50. Signed by Bob Budiansky and Jose Delbo when they were at LFCC.

So how to take part. Simple.

It's a blind auction running until the Big Broadcast day itself, Saturday 15th of August. Starting at £19 (the original cover price), DM me what you would be will to pay for this (via PayPal only).

I will cover the postage to anywhere in the world, so all the money will go to the charity.

And this year, because it's not as extensive an auction as I've been able to put together when at the actual convention, I will personally match the highest bid to top it up.

So if you can, bid high.

Not everyone's on Twitter and I don't think anyone's really posted about the fact there *is* a weekend event online in lieu of the normal TFNation convention?

Which is happening on the Friday as well as the Saturday. And includes scheduled appearances by various creative guests who would've been attending the convention. 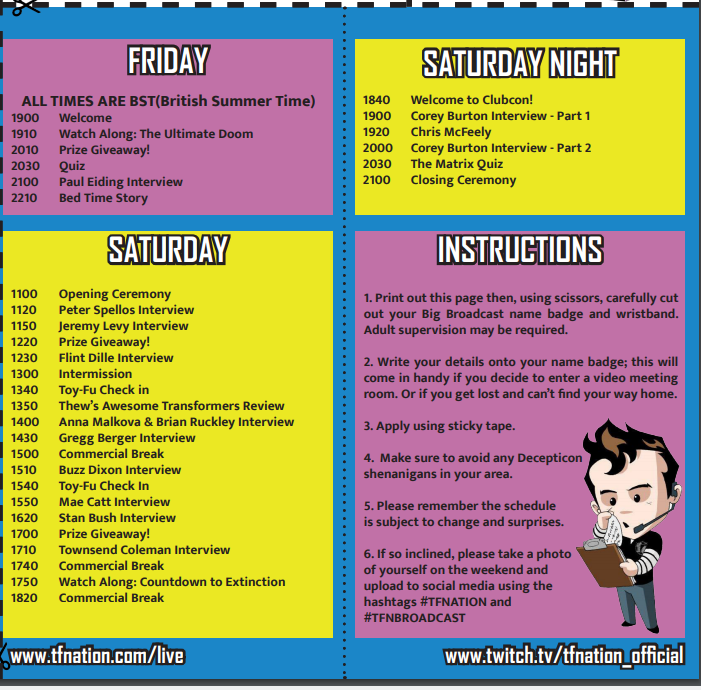 Toy-Fu will be selling stuff online (also for charity) which warrants a check-in with them:

If you're in the UK and see this, it's worth stopping by https://www.twitch.tv/toyfu332

Again, it's all for charity.

edit: Friday evening went well. They'll be back Saturday morning from 10:30am.
Top

All working pretty successfully so far. Been listening to Flint Dille, bought a t-shirt, got some stuff from Toy-Fu, having a look at Forge people at the moment.

I'm guessing the videos will be saved at https://www.twitch.tv/tfnation_official afterwards.

As well as things on YouTube you can also find some older convention videos here from regular attendee Raymond T:

edit: Fair number of people around, about 370 in the TFN stream and 50 in To-Fu's, although there's probably a bit of overlap.

edit: Also Kapow are running a sale in lieu of the convention --

-- and there are Forge and retailer pages here --

Of what I've had a look at so far, this is rather striking -- it's a Brainstorm pin with flip down faceplate (and faction symbol on the reverse, for MTMTE/LL fans):

Apparently, "Audio for portions of this video has been muted as it appears to contain copyrighted content owned or controlled by a third party." but I'm not spotting it on a brief skim. However, I wouldn't put it past Twitch to strike the videos and/or channel retrospectively. IIRC they did that to a lot of streamers not so long ago.
Top

I wish I had the time for all this! I appreciate the effort TFN have gone to to do this, just annoying I've been busy all weekend. Hopefully will be able to catch some of this at some point. Thanks for the heads up on the Kapow sale - picked up some bargains which I'm quite excited about