Cheers. One over this side of the West Mids is half cleared shelves with stock take stickers on it, so looks like it's that time of year.

All of the Leader Starscreams/Skywarps have gone bar one, too.
Top

The one next to work has had a box of Sixshots in. Can try to snag tomorrow before they get scalped if anyone wants, after that am away for a few days.
Top

Apparently, some of the LKR Leaders have turned up at B&M for similar prices; Megatron, Prime & Dragonstorm. Some have Sixshot in for the same as Black Shadow and Gnaws for £5.00.
Top

Not sure if this is the right thread, but I can't seem to find the old UK thread, so here goes nothing.

Spotted these in Forbidden Planet Cardiff the other day. £18-19 in price, each is stickered. Haven't checked the other places, may have time to do so today; will update this post with more info if Entertainer and the other one in St.David's 2 have any new stuff.

Not found any Merry Hill or Dudley (and I think the same for Dalek).

If anyone finds a set and doesn't want the Prime, interested if price reasonable. I've already got a Nautica and the Autobot clone.

With the amount of publicity I assume most will go to staff.
Top

Spotted this in B&M Bargains Pontypridd the other day. Not sure how much as I didn't buy it. It's obviously an oversized knockoff of CW Hotspot, and there don't seem to be any accompanying Protectobots, despite this still having the combiner ports and it being called a combiner.

EDIT: Image won't upload from my phone for reasons... will fix when I get back to my computer later.

This one, also available in other colours (not my photo)? 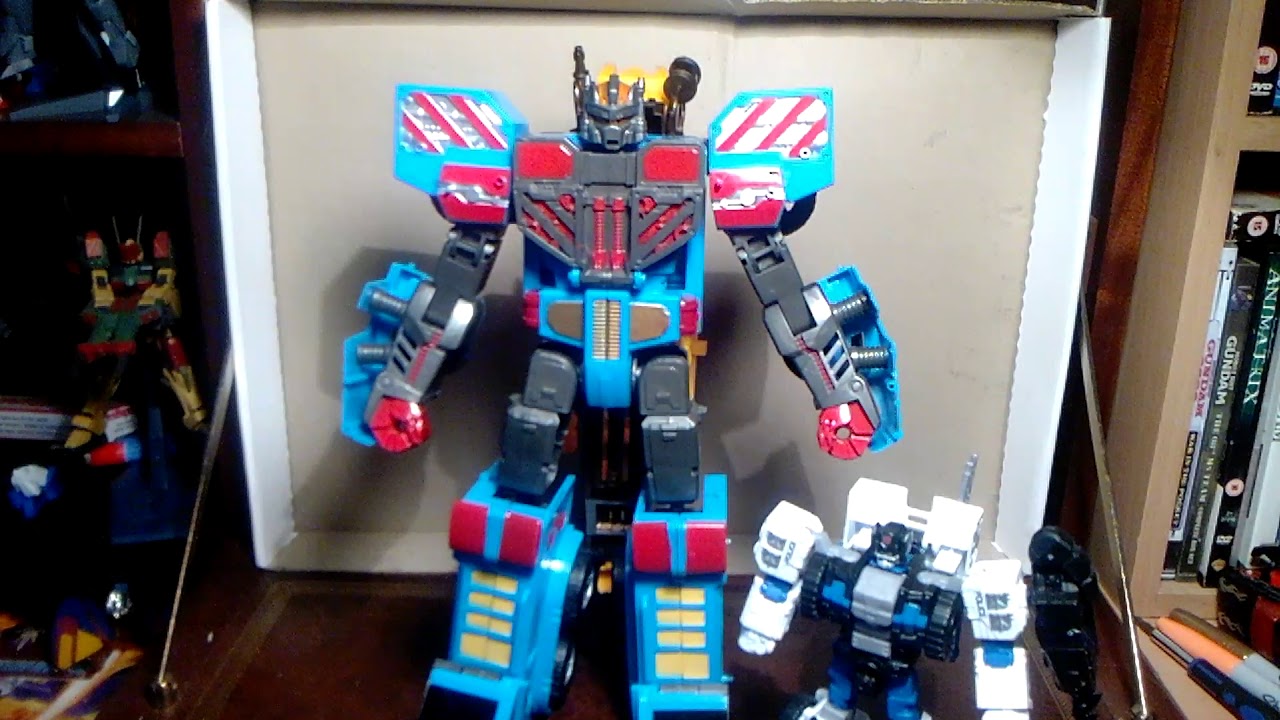 It might be a box set if it's the one I'm thinking of. Seemed overpriced considering the apparent quality.
Top

Denyer wrote:This one, also available in other colours (not my photo)?

It might be a box set if it's the one I'm thinking of. Seemed overpriced considering the apparent quality.

I think that's the one...it didn't look like a box set to me, as the fire truck was the only figure visible in or on the back of the box.

The upload system seems to be just timing out on me for some reason. I've tried file upload and upload from URL, now, and it's just not cooperating. =/
Top

Looking at this there's no other figs in the box, just a load of parts around the edge in the oversized box;

Denyer wrote:Looking at this there's no other figs in the box, just a load of parts around the edge in the oversized box;

I thought so. The quality's not great, so I guess it's debatable as to whether or not it's a shame that there aren't any other Protectobots to go with it.
Top

There were KOs in this scale at least of Streetwise, Rook & First Aid. My local B&M had them in last year. Sir Toys would probably be your best bet if you want a full set of wibbly oversized KO Protectobots.
Top

Humble Bundle (humblebundle.com) has a deal going on right now for a ton of digital IDW Transformers comics. There's tiers of $1, $8, and $15, the latter of which gets you (I believe) the entire run of IDW Transformers to date. I just grabbed it so I could read them on my Kindle. It's DRM free, which means you can download CBZ, PDF, or ePub files (and some are in mobi) and put them on whatever you want: PCs, iPad, tablets, Kindles, etc. I downloaded the CBZ files and a Kindle App called ComiCat for $3, which works pretty well.

Part of the proceeds to go charity, in this case the Hasbro Children's Fund - there's sliders at the bottom so you can select what money goes to the charity, the publisher, or Humble itself. Never used Humble before but it's pretty awesome.

There's a massive load of TPBs included, as well as some single issues. I totaled 85 items, but a lot of those are TPBs that contain 5-6 issues each. All the -ations TPBs, All Hail Megatron, MTMTE Vols 1-10, RiD Vols 1-10, The Wreckers books, Dark Cybertron, Lost Light, GI Joe/TF, etc. Just a bunch of stuff! It's still running for 9 days, so it'll end around 4/10/19.
Top

check this out, this time B&M Stores(UK) have bootleg Oversize FOC Combaticons

+ they also have bootlegs of Generations Legends Cosmos in different colours Those look awful. I love them!

I was in Home Bargains today, and they've got the Last Knight Deluxes at £11.99 and the first wave of POTP Deluxes (Slug/Swoop/Jazz/Dreadwind) for £9.99.

The Entertainer are still trying to shift all those Studio Series Thundercrackers...
Top

Wandered into B&M in town and they have Studio Series Deluxes for a tenner, WWII 'Bee, '74 Camaro 'Bee, Barricade and DOTM Sideswipe. They've still got some of those Bravo figures too, for £7.99.
Top

Rather unexpectedly, someone's just pointed out that Smyths are offering pre-orders for the Gigwatt "Back to the Future" mash up figure --