Hi! I'm new here and it's nice to meet you all. I Need some advice: I've got Bineltech Grimlock not long time ago. Great figure, but it got one defect straight from the box: the spoiler it's uneven (see pics). I don't know if it's just mine or on any of this mold (I've seed this alot on Bineltech/Alternators Wheeljack, but rarly on Grimlock).
Any way to fix it or maybe even buy this part and replace it? 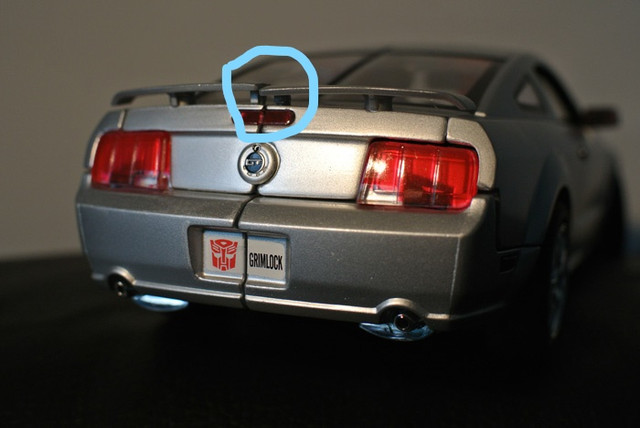 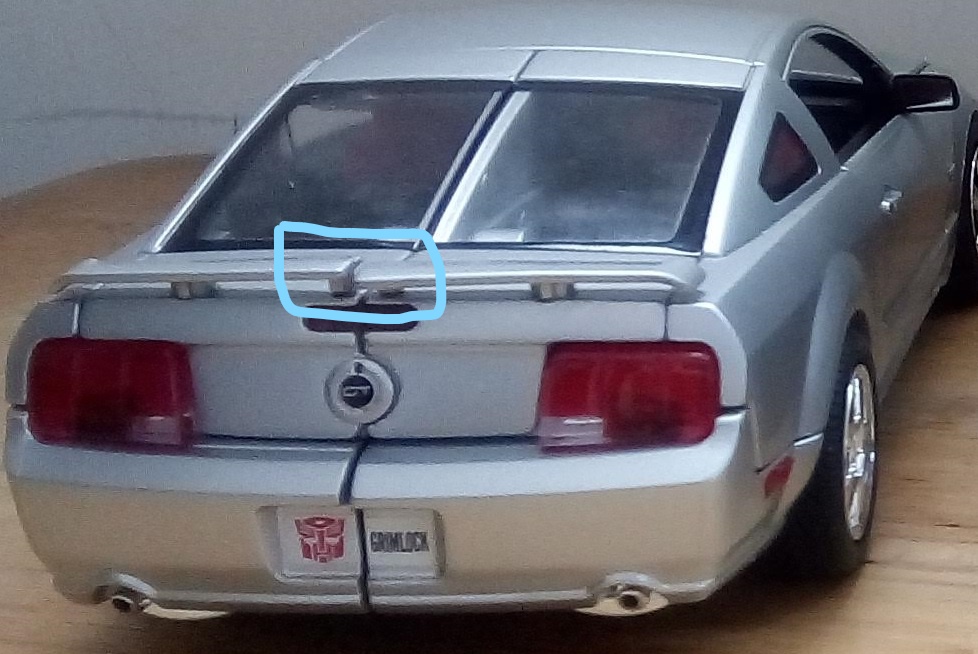 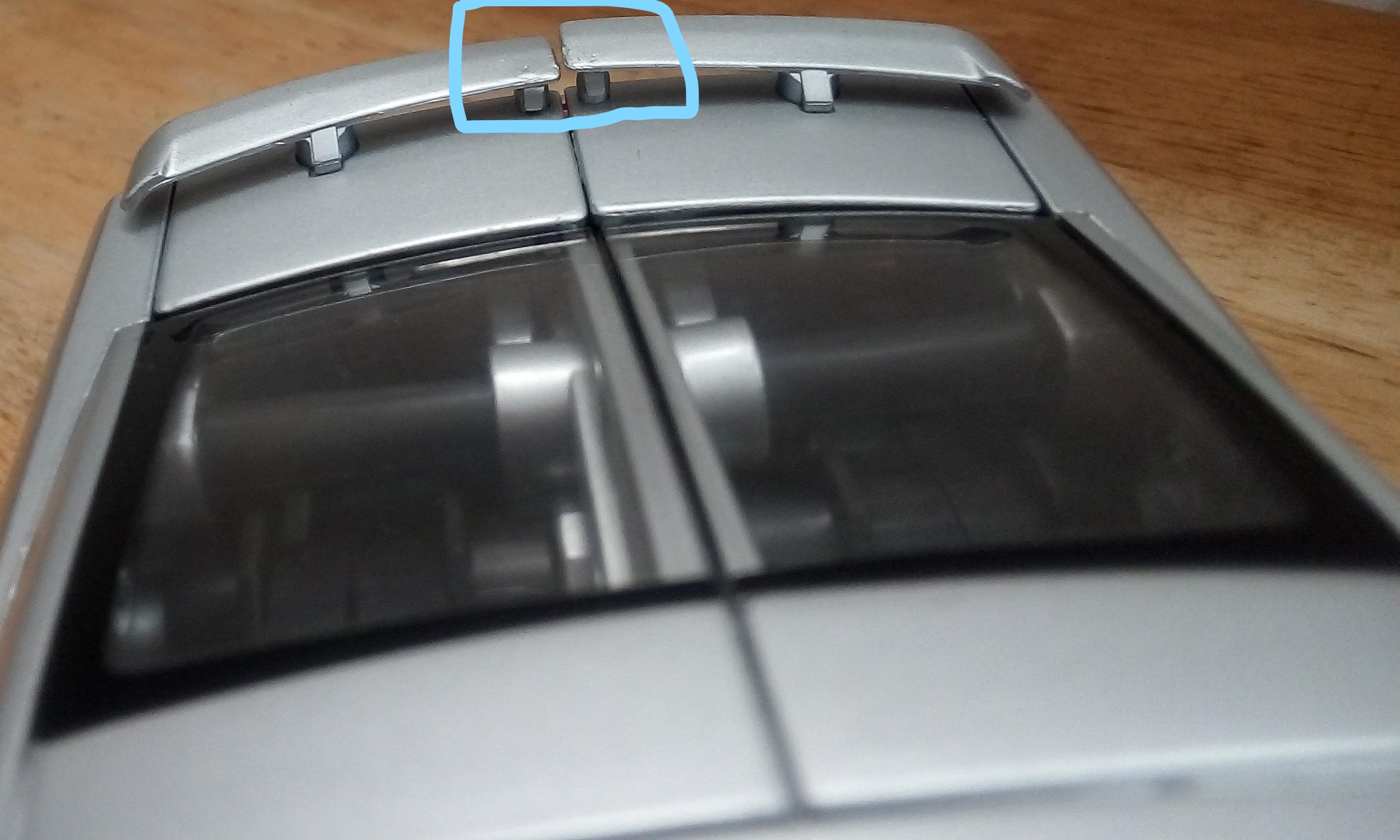 Hi there and welcome to TFA!

It looks like the plastic is mis-shapen, it's been a while since mine has seen the light of day but the wing should definitely line up.

Was it purchased 2nd hand or as mib new?

Thanks for the help

It's 2nd hand from JUNGLE, in box. I wanted mib, but it costs too much for a bineltech...
The hair dryer thing sounds nice, but since I don't know how to do this technique and probaly damage it even more, I'm not gonna risk it. Anything else I can do?
Top

Nothing else you could do to be honest, I can't imagine how the warping was caused in the first place, short of something rather heavy being place on the wing.

I understand not being confident to try the hair drier technique, it requires a lot of patience and outs ready to go wrong if you're not careful.

You may just have to make your peace with it. IIRC, you should barely be able to spot it in robot mode and on a shelf it won't be very noticeable as the car.
Top

Is it flexible? That is, if you try to bend it into proper position, does it not move at all, or does it just bend itself back into warped position when you let go? If the latter, maybe you could bend it into proper position, wedge something in between the spoiler and car to hold it in place, and let it sit for a while. Something like hard rubber or rigid foam should be strong enough while not scratching the paint. Maybe wrap a tissue around it. I've done similar with hard rubber pieces, like RID Jetfire's wings, that have bent out of shape. I don't know what Binaltech Grim uses for the spoiler, though.

Otherwise, just display it with the rear of the car towards the back of the shelf, and it won't be noticeable.
Top

It's not flexible at all (hard plastic), otherwise I would try to fix it myself.
Don't know if it works and if it's the solution, but maybe I'll try to unscrew it from the back of trunk and adjust the warp part into posision or something.
Top

helix2 wrote: ↑
Sat Nov 28, 2020 8:25 am
It's not flexible at all (hard plastic), otherwise I would try to fix it myself.
Don't know if it works and if it's the solution, but maybe I'll try to unscrew it from the back of trunk and adjust the warp part into posision or something.

If it's solid plastic and you do loosen the screw to adjust into position and slowly tighten it back over time you may run the risk of warping the other part of the wing as the warped part pulls down on the straight part.

I think it boils down to your intentions for displaying the figure.
TFArchive content and community revitalisation project

Thanks for telling my this before I tried... Any more ideas?
Top

I don't think there's really a solution that doesn't have the pitfall of potentially causing more of an issue one way or the other.

As I've said, and tantrum said, it depends how you intend to display the toy and if you can live with it not being quite right.
TFArchive content and community revitalisation project

Don't worry, I can live with that

Just wonderd if there is a solution to this, that's all.
Top

Where are you in the world? I can probably find the parts in my custom fodder box, but depending on where you are, the postage may not be any cheaper than the price of buying another one.

Also, Binaltech and Alternator Grimlock are visually identical aside from the chrome wheels on the former, so you could swap out the parts from a broken/junk alternator safely.
Top

I'm from Israel. If you can find parts, it will be great!
And I Don't think it's worth buying another one just for a spoiler (unless the price is very low), so I was trying to find a broken one or even a KO ver of him (don't know is a KO parts can fit a legit transformer), but so far, no luck

Just be patient when hunting for parts. They turn up sooner or later.

Dug out some of the mustangs, and here are the alternator and binaltech side by side: https://imgur.com/a/SyGLYXl

As you can tell, there's no visual difference between them aside from the chrome on the binaltech (the difference is immediately apparent when you pick them up, though), so finding a junk or broken alternator version for parts would be fine. You'll notice that the same part on my figures is slightly 'off' as well. Not sure if it's age related or if I just never noticed it without me attributing it to mistransforming the figure. Either way, it seems I don't have good copies to send you (which is fine because postage to Israel would be too much anyway - the USPS website says even the smallest of boxes and envelopes cost $36 minimum).

I'd try the above suggestion and heat the part to make it pliable, and then gently bend it back into shape. You could try a hair dryer, or you could use pliers to hold it in boiling water for a short amount of time. No matter the method though, please test it out on something broken first! No reason to find out the hard way whether a method works or not.
Top

I know that binaltechs/alternators are almost identical (I have both versions of Meister).
Yea, I've notices that both versions have the same problem, so I think that it might be a defect in the the factory line.
Anyways, Thank man, for trying to help out a fellow transformers collector

So I ended up buying another figure, this time MISB from Mandarake. No spoiler problem this time

helix2 wrote: ↑
Sun Jan 10, 2021 8:15 pm
So I ended up buying another figure, this time MISB from Mandarake. No spoiler problem this time

That's certainly one way to "fix" the problem!!

Glad you got a good one. Binaltech Grimlock is quite the toy!
TFArchive content and community revitalisation project

helix2 wrote: ↑
Sun Jan 10, 2021 8:15 pm
So I ended up buying another figure, this time MISB from Mandarake. No spoiler problem this time

That is how things get fixed sometimes, lol. Glad you got a good copy of the figure! It's probably my favorite robot mode of the Alternator line.
Top

Thanks for the kind replies.

I must say this Grimlock it much better then the last one, especially with much stiffer joints that can hold poses. But it seems that he suffers from some mild paint chipping on the right die-cast part near the hood and on the front fender bender, even though I treat him with care on the shelf, trying to prevent this from happening (The other Grimlock already has paint chipping when I got him), but it looks like it would happen eventually, maybe due to transformation or something.
So, since I don't know any other way to fix the chipping from happening, I've been thinking maybe buying a broken alternator (don't know from where) or a cheap second hand one (ebay?), and do a bit of parts swapping, fixing it with plastic front fender bender instead of die-cast one, and having spare parts just in case. What do you guys think?

And since I'm on the subject, is there any stickers or spray to make his black belly golden, like the G1 Grimlock toy?