Holy shit! Oh man that is amazing! I am so jealous. I wish I had the skill, time and resources to pull something like that off.

I've got to step up my game with how I choose to transform my TFs.

The Fossilizers are be best thing Hasbro has done in years, a fresh idea executed in a creative way but one that also feels completely at home in the wider Beast Wars milieu.

I think Wingfinger is probably the most dynamic action figure out of the four. Being as skinny as it is certainly helps, but the whole thing is also just a mess of joints. I especially appreciate the range on the ball-joint wrists, which are great for wielding his swords. The scrawny robot mode looks pretty sad in package, but it's a lot of fun once you get it out. The beast mode is nice too, and it's really easy to see why they made this one a Maximal. The pterodactyl skull just looks so cheerful!

I had a go at combining the three partsformy ones, but it's even more obvious with all three of them in hand that Hasbro didn't catch on to how popular it was to combine these modular figures until it was too late. They did include a second head with Wingfinger to use when combined with the others, which is nice. But even though Wingfinger reuses some of Paleotrex's joints, the three dinos' parts really aren't all that compatible with one another. You can make it work, but the results are pretty wobbly and not much fun to play with.


Tantrum wrote: ↑
Wed Aug 25, 2021 12:00 am
Fangry is, I'm sorry to tell you Warcry, adequate. He's not worth tracking down and paying for an exclusive set with 3 other figures you may not want. Nor is he bad enough that you're not missing out if you don't get him. He's a decent figure who looks good in both modes.

That's what I was hoping to hear! Honestly, he didn't look like much once higher-quality pics of the set started showing up. I'm still annoyed at them on principle, though.


Heinrad wrote: ↑
Tue Sep 07, 2021 1:38 pm
Then Hasbro released what appears to be the Japanese Legends versions as Walmart exclusives for our Four Warriors from the sky, only lacking the mini-vehicles they came with in Japan. And because reality hates me, Chromedome never showed up around here.

I wonder sometimes why Walmart bothers getting exclusives that they never intend to stock. I haven't seen a single Headmaster in my local stores, most of the G1 reissues bigger than a Minibot have been no-shows, 3/4s of the Netflix stuff has been impossible to find and I've seen a single, solitary Beast Wars reissue. My understanding is that it's a bit better in the US, but up here each store gets maybe one case of any given exclusive. Other times, they just set aside the shelf space and never actually get the toys in at all.

I know the point of exclusives is just to get buyers in the door, but that only works if people believe you'll actually have some!
Top

It's been kind of the same around here. We've done a bit better with the Netflix stuff, but I haven't seen any Beast Wars reissues, the only reissued Classic Headmasters(or whatever they're technically called) I saw were Hardhead and Highbrow, I think the last strictly G1 reissue I saw was Blaster..... I mean, I get it, having stock nobody wants to buy hurts the bottom line, but so does having no stock at all.

That being said, the entire toy aisle looks pretty bare right now. Apparently Kenner re-released the Real Ghostbusters Ecto-1, and the only reason I found out about it was for some reason YouTube felt I wanted to watch a review. That being said, YouTube also decided at some point that I want to live in a van. I could see an RV, maybe, but 'van life' is something I couldn't do. Where would I put all my Transformers?
Top

Generations Selects Transmutate - Bought from EB Games, although the method to do so was different since some of Australia is in lockdown again, so I had to pay for it over the phone.
Top

The universe obviously got tired of my bitching.

I found this guy while I was out grocery shopping. And I definitely can't say no to an MISB Beast Wars figure that I don't already own, not even when they're charging the already inflated Deluxe prices for a Basic. I mean, I'd probably pay twice that for a loose 90s Rattrap, so it's tough to get really worked up about it. I can definitely get worked up about the materials, though. The joints on this thing are probably looser than the average 90s one would be, and I think it's because Hasbro used different, modern plastic formulas that are less "grippy" than the plastics that the 90s stuff used for the same parts. It doesn't ruin the figure but I'll definitely have to treat the joints with some acrylic polish to tighten them up.

Beyond that, Rattrap's a cool little flipchanger. I've always had a soft spot for these guys -- one-steps that are easy for kids to transform, without compromising the fun factor in robot mode. And I loved the retro packaging, all the way down to the Kenner logos on the card.

And how have I gone this long as a Beast Wars fan without knowing that the original Rattrap toy's head was grey? 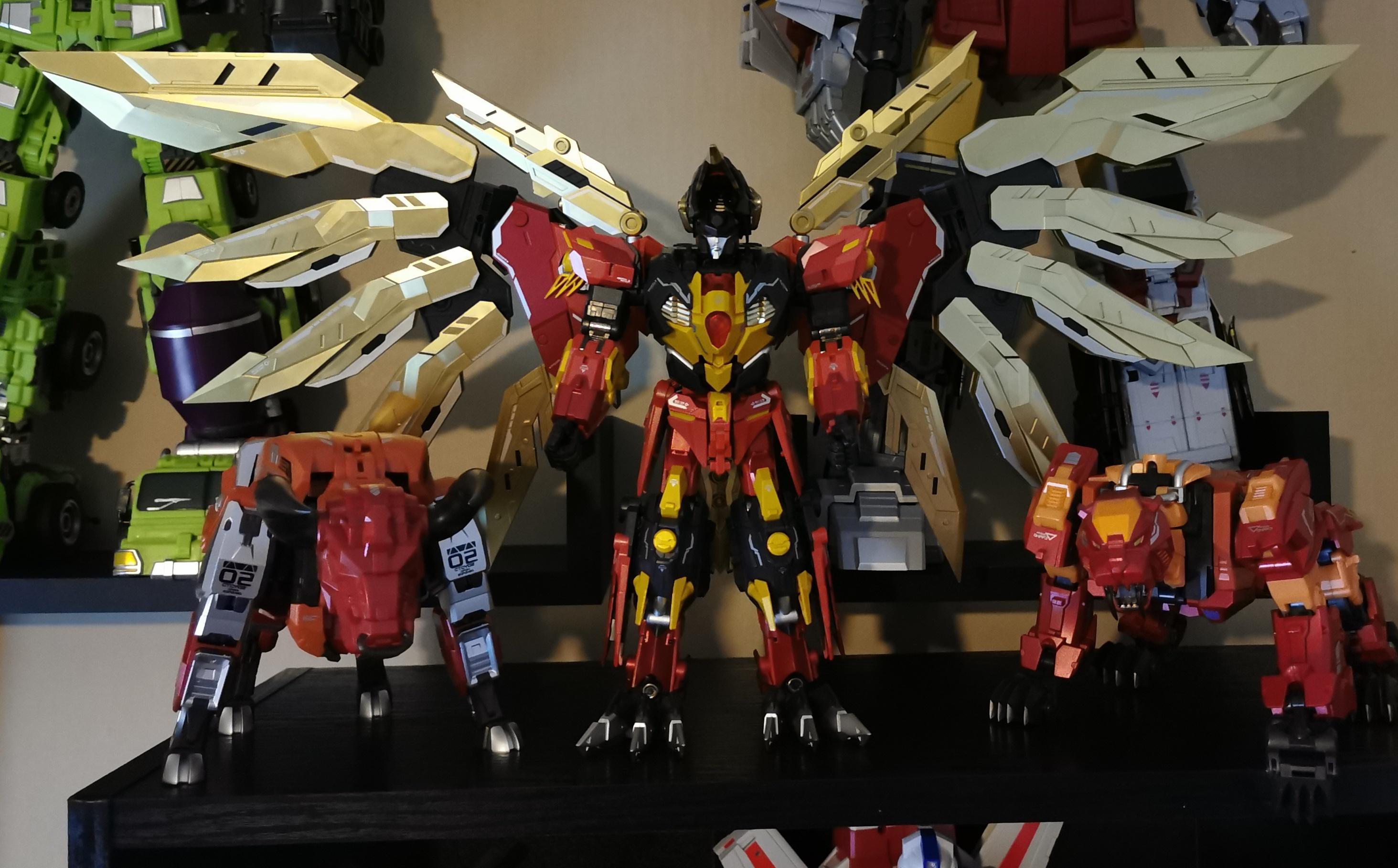 Amongst far too many other to list (cos who wants to just read endless lists of things?!) comes this magnificent bastard toy!
Cang Toys Firmament (not Divebomb) wing span is nuckin' futs on this thing! Roughly 65cm at full stretch.
Top

I've bought lots of stuff lately. Most of it has made me happy forever for a minute or two before the thrill wears off.

I had the earth-mode Sideswipe and birb Skywarp two pack show up yesterday. Sideswipe... I should sell. I don't care about him. I just wanted AMERICA BIRB, because the Airrazor mold is great. This version is an homage to the Beast Wars Magnaboss-Silverbolt/Skywarp. What that means is that even though it transforms differently than the original (being a remold of Airrazor after all), the new robot head still homages the old figure by having a bird hat. This is really daft and I love it.

EDIT: I was wrong--it's just the robot head that's different. Birb head and wings are the same.
Top

“It’s about freakin’ time! Ya finally got us a ship!” Rattrap looked at the orange spacecraft. “Th’ actual ship’s gonna be a lot bigger, right?”

Dinobot looked at the ship, then looked down at Rattrap. “I do not think this is what you were hoping for, Vermin.”

“What? Crew quarters, lots’a guns, big enough t’hold everybody. Well, once it gets built, anyway.”

“So you guys like it? I call it The Ark.” Wheeljack walked up to the pair, pointing at the ship. “Pretty good, huh.”

“Yeah. So when ya gonna build th’ real thing?”

“This is the real thing.”

Wheeljack’s shoulder cannon locked onto Rattrap. “We’re going to go back to Cybertron. Get aboard.”

War for Cybertron Kingdom Ark: Thanks once again to BBTS - and again no thanks to FedEx - I now have The Ark. I have to say, I like it. It’s not perfect, it’s not going to get transformed to robot mode much, and it looks great in ship mode. Robot mode doesn’t look bad, but when you’re trying to pose it, the ratchet joints are really tight. And the first time I tried to transform it, pieces popped off. They were easy to clip back on, but it is kind of annoying. And Teletran 1 is really cool.
Top

I think I'm gonna get a Rattrap.

Hopefully this post will remind me that I wanted to get a Rattrap.


You have a toy I want. I don't like you anymore.