I think they were like that brand-new, it's not matched particularly well (and I think probably connects with different types of plastic used for joint pieces to those that take paint, without digging him out). I did patch paint the bright yellow bits.

Apart from not getting a weapon, it's nice to see new characters done fairly well.

Not sure what the thinking on pricing Cyberverse like that over here (and apparently in Canada too) is, though. They just end up remaindered in places like Tk Maxx.

Meteorfire is worth a look too, as a decent generic.
Top

None opened yet - WfC Artfire & Nightstick, RiD Prowl, Legacy Iguanus, Buzzworthy Blue/SilverStreak, Windblade model kit. The Prowl is used, and a bit yellowed. The yellowed plastic wouldn't even look bad if it weren't next to unyellowed paint.
Top

Tantrum wrote: ↑Wed Apr 27, 2022 10:06 pm My only real issue is opening the chest to get the head out when transforming to bot mode. It's hard to open the compartment, and the center head crest doesn't quite fit when folding the head out. It rubs against the barrel, and I think I see a stress mark forming. Am I doing something wrong?

I don't think so. I just got one a few weeks ago and I have the same issue. That darker metallic gray spot is really hard to pull out when his head is tucked in there.

As mentioned, I picked up Legacy Galvatron. The last Galvy I owned was the Universe Deluxe debacle, so it's nice to have a properly sized one. Good chunky figure with some nice heft too. I'm fairly pleased, but not over the moon with him.

Also nabbed Legacy Kickback from Walmart a couple weeks ago. Very nice figure! As the only Insecticon that I owned as a kid (and one of the few that survived my childhood), I have a soft spot for KB. Excellent robot mode - super posable, stable, and really nails the look. Sad that his chest compartment doesn't open though. Not much to the transformation as expected, but it's pretty fun regardless. I don't much care for the energon blades, but it's a nice additional accessory that reminds me of the ones that came with the video game Kickback.

Pre-ordered the toy colored Gen Selects Cyclonus too. I have the lavender one, but it would be awesome to have one colored like the toy I had back in the day.
Top

Finally gave in and bought a ‘mystery’ box boasting a Netflix logo and Transformers: War for Cybertron Trilogy banner. It’s been shelf-sitting at a local toy shop for ages and ages, so I figured it could use some love. As anticipated, it’s Ultra Magnus... his picture is on the side of the box duh. It’s a substantial, collector’s figure coming with a goodly number of guns, one of which is Battlefield Rung (which technically makes this UM a Targetmaster),and three tiny, pink energon cubes which are way too small in proportion to the figure, and were packaged beneath a block of black Playdoh!
Top

Denyer wrote: ↑Sun May 01, 2022 9:58 pm I think they were like that brand-new, it's not matched particularly well (and I think probably connects with different types of plastic used for joint pieces to those that take paint, without digging him out). I did patch paint the bright yellow bits.

I was going to say "but the blues match in the pictures I've seen people take of him", until I took some pictures of my own...and the blues matched perfectly on-screen even though they're totally different in real life.

After having him for a few days, I've decided that the different shades of blue actually contrast pretty nicely.


Denyer wrote: ↑Sun May 01, 2022 9:58 pmNot sure what the thinking on pricing Cyberverse like that over here (and apparently in Canada too) is, though. They just end up remaindered in places like Tk Maxx.

Yeah, these things retail for between $20 and $25 here, which is pretty nuts for what they are.

He's one of the ones I've had my eye on, actually. Wildwheel and Thunderhowl likewise. I'm also quite fond of their take on Slag (it's significantly nicer than the bland SS86 figure), but they're selling that for the same price as a Generations Deluxe and that's bad comedy. I doubt I'll grab any other Cyberverse stuff unless I luck into a good clearance again, or if they wind up at Dollarama or something.

I've always loved that figure. The other RiD Autobots never really did much for me, because they followed the same heavily-kibbled design aesthetic as the Japanese BW molds. But Prowl, for whatever reason, makes it look good.

I need to track down another, one of these days. Mine has a broken door. Maybe the blue version, for variety?


ganon578 wrote: ↑Tue May 03, 2022 4:59 pmPre-ordered the toy colored Gen Selects Cyclonus too. I have the lavender one, but it would be awesome to have one colored like the toy I had back in the day.

I thought I was going to love this right up until I actually saw it. I think it's because I associate these colours with Marvel, and the character model in the comics was just so different to the cartoon one.
Top

There's two things going on with Hammerbyte. The plastics weren't matched originally; i.e. the arms/chest weren't that nice blue on the legs or centre of the chest... but pulling him out of a tub where it hasn't been exposed to light or even much air, there's massive discolouration and the outer surface has changed quicker than the internally moulded parts. Which makes me think maybe it's mould release agent or other chemical factor that's accelerating the reaction, as well as plastic type.

Cyberverse Dinobots... I found all of them in stock at various places overall working out at old deluxe price apiece so I've just got Snarl/Slag to come (Swoop will be the POTP blue one since there doesn't seem to be a release of him yet). Sludge is more impressive than Grimlock -- because Grimlock feels like a cost-controlled downsized figure and a leg came off straight out of the packaging. Also a different plastic type to the later dinos. Also Sludge is definitely retro in design and sculpt. They remind me of action master / comics crossovers, and that's not a bad thing at all.

RiD Prowl... absolutely, got one again at the last Toy-Fu livestream. I assume that modern design could handle the kibble a bit better, but it's already a very good mould.

Cyclonus... leader class type pricing for a voyager and a mini figure, I'll pass even though it's probably the best one so far with 80s toy leanings. I think the TR one is underrated to be honest. It's much better than deluxe scale attempts. Add some stickers, metallic paint and a targetmaster and I'm quite happy.
Top

Newest acquisition is that humongous Arc toy. He's pretty good for such a big guy. But currently, I'm stoked for the Masterpiece Trailbreaker coming out.
Top

managed to get SS86 Gnaw from a friend, and also got Kup, Blurr, and Jazz (SS86) as well.
Beware of Troy McClure!
Top

I found Legacy toys at the store for the first time! There was what looked like the scattered remains of one or two cases each of Voyagers, Deluxes and Cores...something like four Bulkheads, two or three Arcees, a Skids that someone had hidden away on an endcap...and my 1988 boy Iguanus on the pegs with a bunch of SS Cores. No prize for guessing which one I came home with.

Legacy Iguanus has a lot going against him. First of all, his accessory is this weird, hard to describe thing that does nothing in either mode but apparently can be built into a mediocre sword with similar bits that were included with Hot Rod and Skywarp (in the latter's case, costing him his machine guns). And secondly, there was basically zero effort put into his alt-mode, he's literally just holding his wheels up with his hands and feet. On the other hand, Iguanus is a fantastically articulated tiny lizard man, and once you toss the...whatever it was he came with into the trash and kit him out with a 3mm gun from an old TF:Prime Cyberverse figure, he's fun to mess around with in robot mode.

But at the end of the day, this figure cost $17 and in no way does it feel worth that. I'm not sure what a three-inch robot can do to feel like it's worth that much cash, but this ain't it. A proper accessory that the figure can actually use would seem like the bare minimum you'd expect.
Top

And some sort of kick stand because a bike that can't stay upright is pretty crap. As is the reliance on ball joints, most of which are loose, and most of the transformation being ball joints. And the hollowness of the back of the legs and arms feels particularly insulting for the price.

I don't much care about the simplicity of the alt-mode (more Pretender inner robot homages, please) as the original is a very low bar and meandering towards being enough to justify picking up an overpriced legends/core class figure. But after having him sat on a shelf for a while because almost nothing else I collect is in this scale, I think it's going to take tracking down a shell to redeem this one.
Top

I lucked out and got one with ball joints that are nice and solid, but all of those are valid points.

I got together all my other modern ex-Pretenders to hang out with him, but I dunno. I just can't get past the fact that the asking price for this tiny little thing is the same as (or maybe a buck or two more than) Big Skullgrin from a dozen years ago. I know that inflation is a thing, but come on. 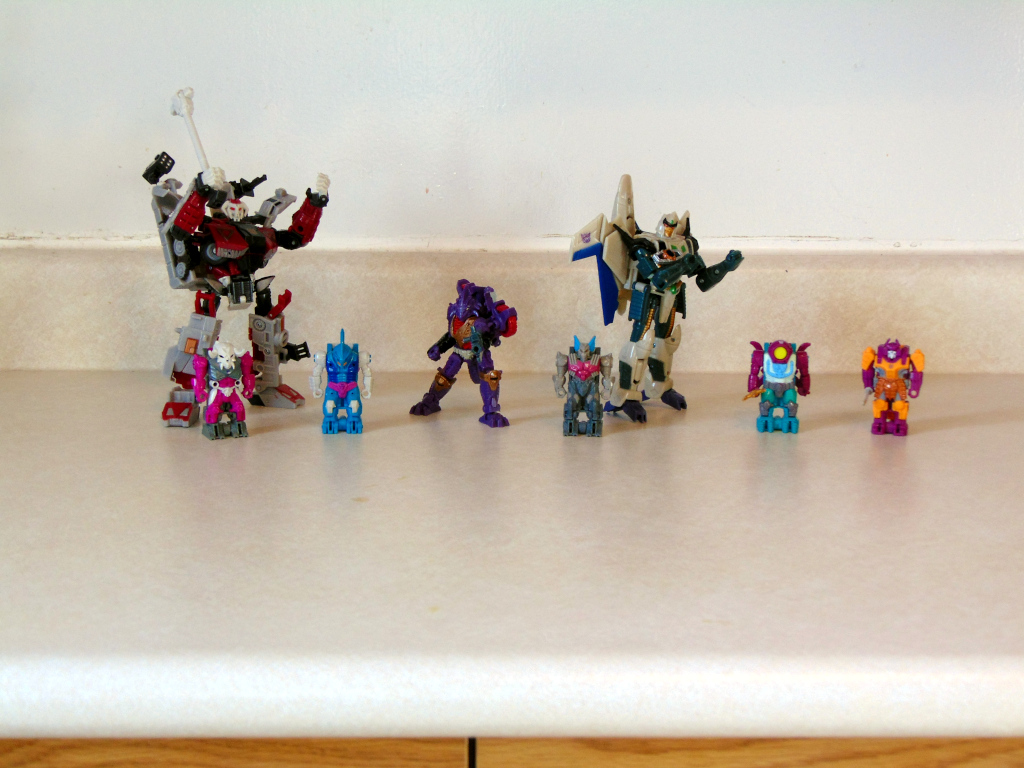 Speaking of ball joints, wow, Thunderwing can barely even stand anymore. Hopefully Hasbro gets around to making a new Voyager Thunderwing at some point before they drive the brand into the ground entirely...
Top
Post Reply
7075 posts